What attitude should supporters of the free market take toward decentralization? Should libertarians support the movement for Catalonian autonomy, for example, even if leaders of that movement are unfriendly to the free market? Do we have a duty to spread free-market institutions far and wide through globalization? Or, on the contrary, should we leave to their own devices communities and nations that interfere with the free market and civil liberties?

On all these questions, Kirkpatrick Sale is a useful guide. This is at first sight surprising, because he does not support the free market. To the argument of Mises and Rothbard that capitalism generates prosperity, he would shrug his shoulders. He thinks that the virtues of material prosperity are grossly overstated. In his view, life was better in the Stone Age; and he would, if he could, return us to the happy conditions that he maintains then prevailed.  When he writes about the “steady state economy” and extols environmentalism and economic self-sufficiency, we can only turn away in dismay. 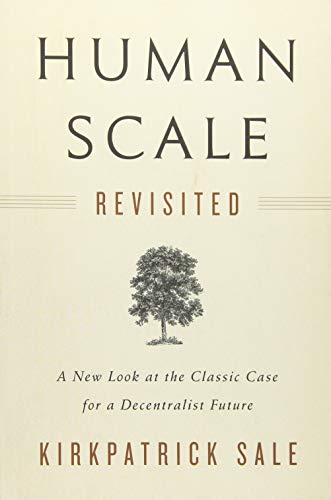 Nevertheless, he has much to teach us, because he holds no illusions about the state. The state, he argues, is a destructive force; and if we must have a state, the smaller the better. “Governments, whether meaning to or not, always seem to create more havoc as they grow larger, and the largest of them historically have tended to be the most destructive and bellicose. … Indeed, so regularly does one encounter this phenomenon in the reading of history…