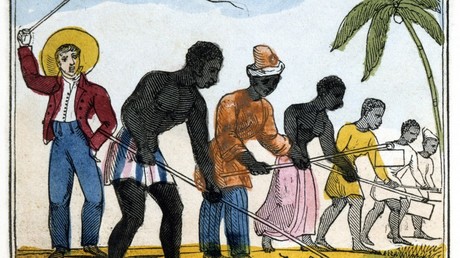 Bristol taxpayers in 2015 were still paying off debt borrowed by the government to “compensate” slave owners in 1833, the Treasury has revealed.

The revelations show that the £20 million (US$28 million) the government spent to reimburse the owners of slaves – who themselves were some of Britain’s richest businessmen – took the taxpayer 182 years to pay off. The descendants of slaves were never compensated, but it appears some would have been paying to compensation slave owners.

The information was revealed by the Treasury under a Freedom of Information (FoI) request, the Bristol Post reports. The Treasury tweeted: “Here’s today’s surprising #FridayFact. Millions of you helped end slave trade through your taxes.”

It added an infographic which said: “Did you know? In 1833, Britain used £20 million, 40 percent of its national budget, to buy freedom for all slaves in the Empire.

“The amount of money borrowed for the Slavery Abolition Act was so large that it wasn’t paid off until 2015. Which means living British citizens helped pay to end the slave trade.”

The tweet was quickly deleted after it sparked a backlash.

Historian David Olusoga, who has written about Bristol’s role in the slave trade, was one of several experts who questioned the tone of the Treasury’s tweet.

“The real question is why anyone thought this was ok?” he said, according to the newspaper. “I really do think we’re getting better at accepting the UK’s role in slavery and the slave trade, but things like this make me question my optimism.

“Also, just to compound the general level of ignorance, when HM Treasury reduce the complex story of the abolition of slavery to one of their fun ‘Friday Facts’ they use an irrelevant image of the slave trade – which was abolished three decades earlier.”

Am I right in thinking that means that descendants of slaves – who never got any compensaiton – have been paying for the compensation paid to slave-owners? Ah, well – another fact for our book on how slavery paid for Bath’s growth in the 18th century. Research is in progress.

Bristol City councilor Cleo Lake said she was outraged. “I want my money back,” she tweeted. “I’m outraged. This messaging is so loaded.”

When the UK government abolished slavery and banned people from owning slaves in Britain and on Britain’s colonies anywhere in the world, those slave owners received compensation. Bristol had the highest concentration of people in Britain who owned slaves in 1833 outside of London.

The slaves themselves received nothing, and had to continue working for their masters for a number of years before they could consider being free.