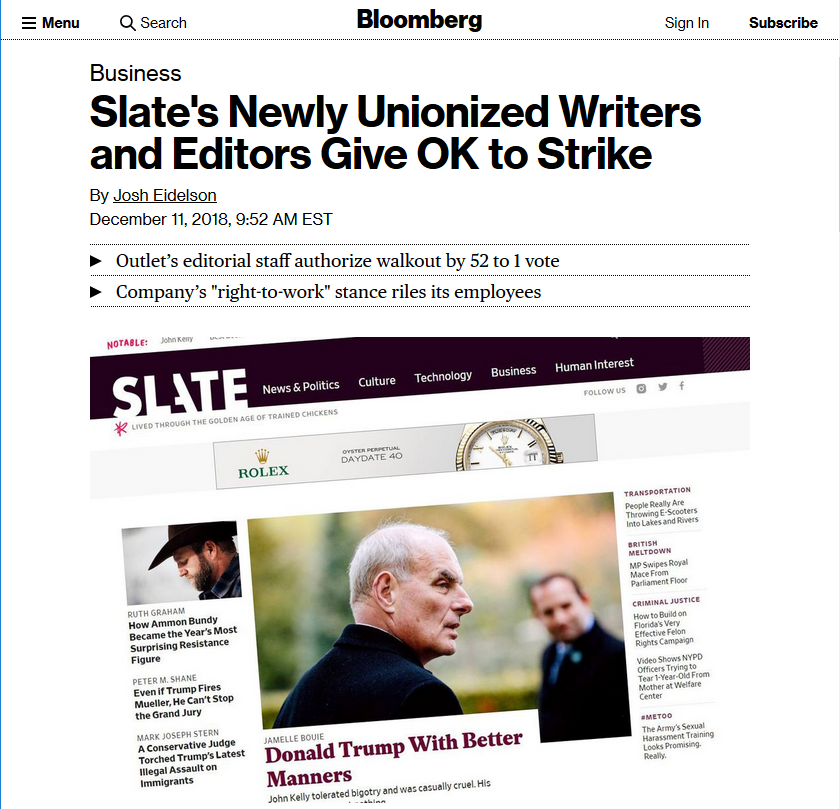 Slate legal writers called the outlet’s “right-to-work” stance “anathema to the values that drew us to Slate in the first place” (Bloomberg, 12/11/18).

While successful unionization drives and contract settlements have been common in the digital media-sphere for the last several years, the sector just may see its first strike. Union members at Slate, represented by the Writers Guild of America East, voted 52 to 1 last week to authorize a strike (Bloomberg, 12/11/18), and the sticking point is an interesting one: The company refuses to back down from its demand that a contract make union fees optional, creating a so-called “right-to-work” environment that unions regard as union-busting.

It’s common for employers to press for things like management flexibility in directing employees, or limiting how much investment will have to made into salary increases or benefits, but Slate has made a peculiar demand that it govern how the union does its business—and, worse, it is insisting that the bargaining unit exist in a position of weakness and division.

Imposing “right-to-work,” or the option for workers in a unionized workplace to opt out of the union without paying union dues or agency shop fees, has long been a campaign of the US right. These “right-to-work” laws are on the books in more than half the states, and as of this summer, they apply to all public-sector unions, thanks to the Supreme Court decision Janus v. AFSCME, which overturned a four-decade old precedent.

In Washington, DC, where the Slate Group is based (it’s controlled by the Graham family, which used to own the Washington Post), there are no “right-to-work” laws for the private sector, but Slate is trying impose them through bargaining. That WGAE members are threatening a strike over this says how much of an affront to union power such a demand is. 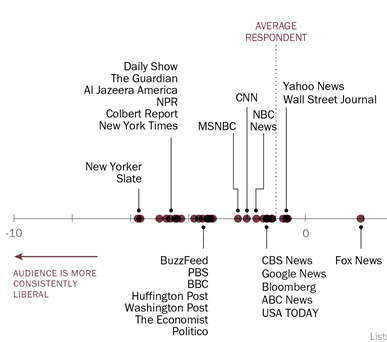 Slate‘s audience is to the left of those of the Daily Show, the Guardian or Al Jazeera America, a Pew poll (10/20/14) found.

“We just feel that it’s a total and absolute betrayal of Slate’s most fundamental values,” Slate writer and union activist Mark Joseph Stern told Bloomberg. Slate is hardly an anti-capitalist news website, but it’s noted by critics and supporters alike for its fairly nuanced takes on politics and the economy, generally seen as coming from the center-left. Pew Research Center (10/20/14) found that Slate’s audience, alongside that of the New Yorker, was more “consistently liberal” than consumers of other mainstream outlets, including NPR, the Daily Show, Huffington Post and MSNBC.

Even New York Gov. Andrew Cuomo, who was elected on a platform explicitly antagonistic toward public sector unions, signed legislation in the wake of Janus easing the blow “right-to-work” would have on state unions. Slate’s bargaining position puts the company firmly on the anti-union right.

So what gives? Why would an institution with such a left-leaning audience take such a reactionary position against its union? Any labor organizer will tell you that liberal  non-profits and even unions themselves are not immune from hostility toward staff organizing, often because unionization can be wrongly read as a lack of dedication toward the outfit’s mission, and because most bosses, regardless of the sector, benefit from having the greatest flexibility in labor relations. The trend of unionization, usually with representation by the News Guild, in digital media—at places like Vice and The Onion—as well as in print/digital hybrids, is perceived as a threat to the labor flexibility that media bosses have long taken for granted.

Such a demand by management is a declaration to other media companies that they should not go quietly into this increasing unionization of the sector.

Regardless of whether there is a strike, or whether this language appears in the final collective bargaining agreement, the damage to Slate’s reputation goes beyond the bargaining table. How can readers take seriously critical commentary on Republican tax cuts, or the administration’s attack of the Affordable Care Act, when the company has allied its own economic outlook to that of the Koch brothers?

That’s a reputation that Slate’s writers themselves don’t deserve. Yet even after this ordeal is over, they will have to write and report under a cloud of distrust of management. From a labor perspective, that kind of tension can be good for building strength in a union, but it will be bad for a media outlet’s credibility.

You can send a message to Slate at feedback@slate.com  (or via Twitter: @Slate). Remember that respectful communication is the most effective.