Six Nations, southwest of Hamilton, Ontario, is the largest reserve in Canada, with 27,000 members, though only 12,000 live on the reserve. It is a mini-multicultural nation, the only reserve in North America that has all six Haudenosaunee nations living together. 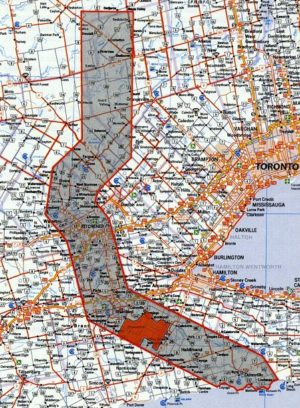 The Haldimand Proclamation, negotiated by Joseph Brant on behalf of the Six Nations in 1784 in gratitude for native support of Britain against the American revolutionaries, was, until 1924, governed by the traditional native government, now called the The Haldimand Proclamation. It promised the lands “six miles deep from each side of the river beginning at Lake Erie and extending in that proportion to the head of the said river which them and their posterity are to enjoy forever.”

This agreement was a decree, never formalized as a treaty, promising what translated into 950,000 acres of what is arguably Canada’s most fertile, scenic, and resource-rich land. As this became apparent in the 19th century, the decree was downgraded by the government, using a new survey in 1821, to 674,910 acres. Canada prides itself in ‘winning’ the war of 1812, but despite fighting for the British then, the result for the natives was to have their earlier promises betrayed, in the first place via the theft of 90% of the land promised to the Six Nations. Canada was becoming ‘independent’, but for the settlers only.

Ignoring the proclamation, settlers moved into Six Nations territory, the land was cleared and…