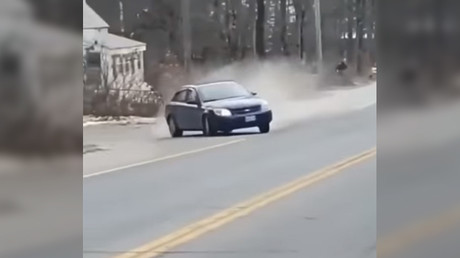 A video filmed from inside a pickup truck shows a horrific end to what started as an GTA-style car chase after a blue Chevrolet Cobalt refused to pull over, eventually running over a tire-bursting strip and ramming two vehicles.

Dale H. Tucker was arrested in Raymond, Cumberland County, Maine on Sunday after he caused the three-vehicle crash. The 29-year-old was trying to avoid a stinger road trap, which police had set up to stop him from fleeing.

The footage, filmed from inside a parked vehicle by local resident Tyler Bisson, shows the speeding Chevy veering off the road as Tucker tries to evade the spike mat on the roadway.


However, the spikes puncture the rear-left tire of his car, making Tucker lose control of the vehicle, which then smashes into a truck and another sedan. The moment the Chevrolet collides with the truck at full speed was captured by Bisson, who kept filming the chaos.

The impact shatters windows, while a petrified female passenger in Bisson’s pickup asks him to call her mom.

The driver and passengers of a Buick, the other vehicle that was rammed in the incident, were not so lucky. Barbara Young, 82, was in the driver seat at the moment of impact, and was taken to hospital. Her passengers, two men aged 61 and 91, were also admitted to Maine Medical Center. The victims’ injuries are non-life-threatening, however.

Miraculously, the Chevrolet driver survived and is expected to face multiple charges once he is released from hospital.

Tucker had been initially sought by police over “a domestic situation” in Casco, during which he threatened drive to a residence in a nearby town to “cause harm.”

A sheriff deputy spotted and stopped Tucker at a busy intersection, ordering him to pull over at a parking lot. The driver, however, sped up and fled. Police chased him for about half a mile but were forced to let him go as he was driving extremely recklessly, and they decided to deploy a spike trap instead.