The Parkland, Florida school shooter never had a gas mask or grenades, authorities say. They are looking into previous calls about him to see if officials failed to act, after the FBI apologized for mishandling a tip.

“The killer never was in possession of a gas mask or any type of smoke grenades,” said Israel.

Nikolas Cruz, 19, reportedly confessed to opening fire on students and teachers on Wednesday, killing 17 and wounding 14 people. He was ordered held without bail. Local media have since reported that Cruz’s younger brother Zachary has been sent to a mental health institution for an involuntary examination, under Florida’s Baker Law. 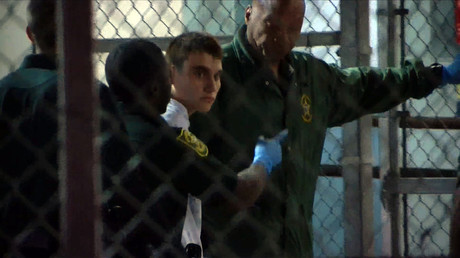 Seven of the wounded are still in the hospital, but the death toll has not risen, Israel said. One of the wounded is the son of a Broward County deputy, who is expected to make a full recovery, the sheriff said.

So far, investigators have interviewed 3,200 students and 200 staff and faculty at the school, and are trying to find out “why this killer did what he did,” Israel said. The sheriff’s office is also looking at over 20 “service calls” about Cruz over the past two years to see if anyone could have done anything to prevent the shooting.

“Make no mistake, America: The only one to blame for this incident is the killer himself,” Israel said.

The FBI apologized on Friday for failing to act on a tip they received about Cruz in January. Someone alerted the bureau to a comment left under a YouTube documentary about a school shooting, with the commenter using Cruz’s name and saying he was “going to be a professional school shooter.”

The tip was never forwarded to the Miami field office, however, and there was no follow-up to the investigation.