BBC Breakfast show viewers were treated to news with a side of “sex noises” this morning in an unexpected surprise for the presenter. Living rooms across Britain were filled with the sounds of a groaning woman as Emma Vardy attempted her live segment from Westminster. 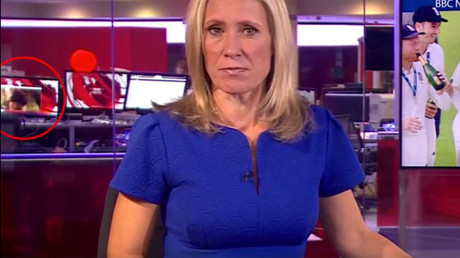 Emma kept up with the report, attempting to ignore the orchestra of orgasms being blared through TV screens. Back in the studio, presenters Naga Munchetty and Charlie Stayt kept their cool, while homes across the UK were left shocked.

Bewildered viewers took to Twitter to ask what on Earth had happened. “Erm the background noise during that last interview at the Houses of Parliament,” one wrote.

“What the heck BBC!” said another, while one woman wrote: “Someone is playing sex noises on the news im shook (sic).”

Another wrote: “Someone kept playing one of those videos that has sex noises on bbc breakfast while a reporter was doing a piece to camera, good job keeping a straight face.”

People in the area at the time helped solve the mystery, explaining the noises were being played over a megaphone.

“Hi David, someone nearby was playing music whilst we were live,” one person wrote. “So that’s what you could hear.”

A prank group later took credit for the confusion, revealing they were sat across the road with a large amp blaring the noise on loop.

A video later showed Emma tearing off her earpiece, clearly angry at the stunt.