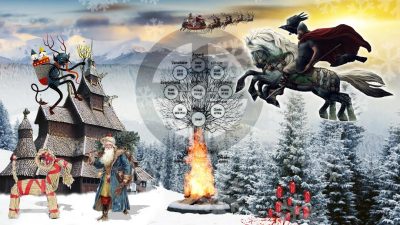 ​​Traditions of the Winter Solstice

Christmas is an ancient feast that has many positive associations for people around the world. While the bible places the birth of Christ in Bethlehem it does not say when, but by the 4th century the Churches in the East were celebrating it on January 6 and the Churches of the West on December 25.

One thing is certain about Christmas is that it is rooted in many traditions and superstitions relating to nature that existed long before Christmas and many have continued in one form or another to the present day. The many strands of Christmas can be seen in the variety of different traditions associated with, or originating in, places all over Europe. These strands are, inter alia, the solstice, the Nativity, Saturnalia, Yuletide, St Nicholas, Father Christmas, and Grandfather Frost (Ded Moroz).

The association of Christmas with its earlier midwinter nature worship traditions declined as the Church exerted its power and authority over pagan practices and in more recent centuries as the industrial revolution took people away from the land and into the cities and factories. Since then industrialisation has taken over many aspects of people’s lives as they shifted from being producers to consumers.

As direct contact with nature declined and scientific knowledge was applied to production, our lives were made easier by an abundance of relatively cheap goods and food. These benefits have come at another price though as…