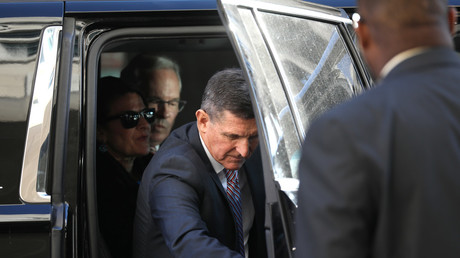 US President Donald Trump’s former National Security Advisor Michael Flynn will be sentenced in March 2019, after he confessed to lying to the FBI. Despite many conspiracy theories, his case has nothing to do with ‘Russiagate.’

Flynn, a former US Army lieutenant-general who served as Trump’s national security adviser for less than a month in early 2017, appeared before federal judge Emmett Sullivan in Washington, DC on Tuesday for his sentencing, but ended up requesting a delay. The new status hearing was set for March 13.

The decision came about a year after he pleaded guilty to lying to the FBI about the nature of his conversations with the former Russian ambassador, Sergey Kislyak.

During the hearing, Flynn once again formally admitted his guilt by saying that he knew lying to the FBI was a crime. He also said that he did not want to challenge the FBI interview with him, which later became the basis for the charges against him.

Some of Flynn’s apparent supporters came to the court almost an hour and a half before the court session, calling for the lieutenant general to be acquitted. However, the long-time military veteran was not expected to get a harsh sentence anyway, as both the prosecutors and the defense asked the court to hand him down a minimum sentence.

Defense lawyers praised Flynn’s military past and good character, while stating that the actions of the FBI prior and during the January 2017 interview, which formed the basis of the case, should be considered“mitigating circumstances.”

Lawyers said that Flynn was not explicitly warned that his false statements during the interview would carry penalties under the federal law and was answering the FBI questions without counsel.

US special counsel Robert Mueller denied any of these facts constituted a “mitigating circumstance” as Flynn “undoubtedly was aware… that lying to the FBI carries serious consequences” and himself “agreed to meet with the FBI agents, without counsel, and answer their questions.”

Still, both the prosecutors and the defense recommended Flynn get no actual jail time. In early December, Mueller touted Flynn’s extensive government cooperation and his “substantial assistance” in his two-year investigation of the supposed collusion between Trump’s team and Russia.


Judge Sullivan made headlines at one point in the hearing when he told Flynn, “Arguably, you sold your country out.”

After a recess, however, Sullivan walked back his comments.

“I wasn’t suggesting he was committing treason. I was just curious if he could have been charged,” the judge said, adding there were “lots of conspiracy theories out there.”

A year ago, Flynn’s plea sparked another wave of anti-Russian hysteria in the US as most media jumped on it as a proof of Trump’s collusion with Russia. In fact, however, this whole case has essentially been nothing to do with the ‘Russiagate’ conspiracy.

The accusations against Flynn stem from him telling FBI agents that he didn’t remember asking Kislyak not to escalate the situation in response to the US sanctions against Russia. The other incident involved him calling the Russian ambassador to discuss a UN Security Council resolution on Israeli settlements in the West Bank and ask him to take certain action on the resolution vote. During the interview, he, however, told the FBI that his call was solely about clearing up Russia’s position on the issue and not about any requests.

The US intelligence services listened in on the phone calls and later put pressure on Flynn over his lies. Information was also leaked to the media in January 2017, forcing Flynn to resign in February, less than a month into Trump’s term of office.

During the ill-fated interview, Flynn was actually questioned by a former FBI agent Peter Strzok, who was later fired after his letters to his lover, FBI special counsel Lisa Page, revealed the duo’s hostility to Trump.