The Senate Judiciary Committee has asked the FBI and the Department of Justice investigators to open a probe into “potentially illegal” actions of one of the accusers of SCOTUS nominee Brett Kavanaugh, who has since recanted.

The man, whose name has been redacted from the committee’s letter to FBI Director Christopher Wray and Attorney General Jeff Sessions, alleged that Kavanaugh together with another man sexually assaulted a woman on a boat at Newport, Rhode Island, in 1985. The accuser said that he recognized Kavanaugh from a yearbook he saw in a TV broadcast and relayed his allegations to Sen. Sheldon Whitehouse (D-RI) on September 24. The claim immediately spurred an investigation by the committee. 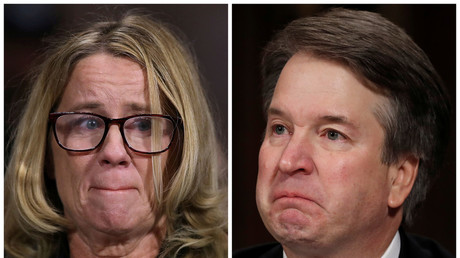 “Committee staff took the allegations seriously and asked Judge Kavanaugh numerous questions about it under penalty of felony during an interview on September 25,” committee chairman, Chuck Grassley wrote in a letter to the FBI and the DOJ.

In the  transcript of the phone call between the committee’s investigators and Kavanaugh, the judge flatly denied the newly-surfaced allegations as “completely made up” and “ridiculous.”

While the name of the account’s holder had been redacted from the record, he was promptly identified as Jeffrey Catalan, as his account’s description and Twitter feed completely match those cited in the transcript.

After the transcript was made public, Catalan recanted his allegations in a tweet. “I have made a mistake and apologize for such mistake,” he wrote on September 26.

Grassley pointed out that “fabricated allegations” impeded the work of the committee “during the time-sensitive investigation.”

Grassley went on to write that he hopes the DOJ and the FBI investigators “will give this referral the utmost consideration.”

Catalan’s Twitter feed in itself is quite peculiar and is filled with anti-Trump rants.

For instance, on July 8, he tweeted: “Dear Pentagon, please save my country from the parasite that occupies the White House. Our you waiting until Russians parachute in like in Red Dawn? Please help!”

Dear Pentagon,
Please save my country from the parasite that occupies the White house? Our you waiting until Russians parachute in like in Red Dawn ? Please help! !!!!!!!!!!

On August 20, he posted a picture of a solar eclipse with the caption: “This is what Trump is trying to do. Block the truth seeing the light of the day.”

Before Catalan disavowed his claims the story hit the headlines of all US mainstream media.

Are you really shocked at this point? Their own sources have recanted their false bombshells and CNN still pretends they’re fact. https://t.co/00EbScAt7e