British sailors have been banned from posting pictures of their highly-unappetizing Royal Navy meals on social media, according to one Tory MP.

The allegations concern the Navy’s HMS Sultan facility, an onshore training base in Wiltshire.

It comes a month after soldiers in Scotland shared images of their own dubious-looking British Army grub. 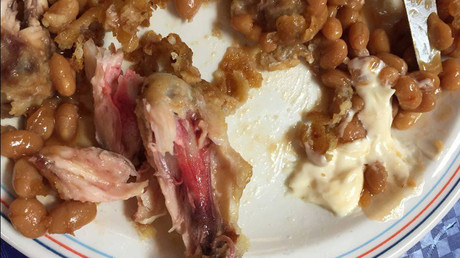 In a Commons question to defence minister Mark Lancaster on Monday, Tim Loughton MP asked if he was “aware that the standard of food for the military at HMS Sultan and other similar naval establishments has become the source of such complaints that service personnel have been banned from taking photographs and using social media to critique it?”

Loughton demanded to know what was being done about the issue.
Lancaster, a former soldier, appeared to deny there was anything wrong with the meals, which are produced by the controversial private contactor Sodexo, on the basis that he had not personally experienced “a poor standard of food.”

He said measures are in place “via the chain of command” and that he is happy to “look into the matter.”

The UK military has become increasingly sophisticated in its effort to avoid bad press. Blanket rules on communicating with media outlets are already in place.

In 2014 it was revealed that any contact, however casual, between serving personnel and journalists or people connected with journalists had to be reported through the chain of command.

Complaints by service personnel about bad leadership and equipment have been an Achilles heel for the military from the Crimean war to the Afghan campaign.

A taste of MoD guidance – which classifies good press coverage as essential to everything from military operations to recruitment – can be found in Joint Doctrine Publication (JDP) 3-45.1, which covers Media Operations.