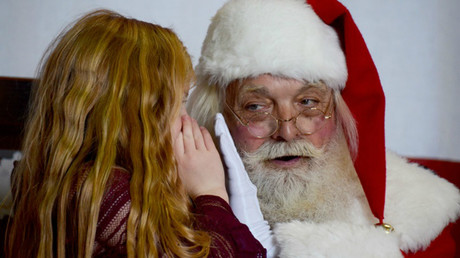 A furious Santa shocked children and enraged parents when he stormed out of his grotto, ripped off his beard and began using “vile” language after a fire alarm went off at a Christmas event in the UK.

The outrageous outburst took place on Sunday in the town of St Ives, Cambridgeshire, at an event organised by Festival Event St Ives (FESt), a local non-profit group.

The Father Christmas reportedly told people to “get the f*** out” after a smoke machine at another event in the same building set off the fire alarm. The free Santa grotto event was advertised as an opportunity for kids to come and see Santa and his ‘chief snowman,’ with each child receiving a gift.

Parents were left with a lot of awkward questions to answer after Santa started ripping off his costume and using choice language in front of dozens of children who had been queueing up to meet Saint Nick and tell him what’s on their wish list, Cambridgeshire Live reports.

One mother who witnessed the eruption told the local news outlet that the Santa used the “most vile language”.

“People were in the process of vacating the building and in came angry Santa swearing, using the most vile language, ripping off his hat and beard with steam literally coming from his ears… not too sure why he was so cross,” she said.

“He was shouting at people to leave, which is exactly what we were doing. Very strange behaviour.”

Another mother said she told her children that the Santa was an imposter and he “will be going on the naughty list.”

The event’s organisers have apologized for any “offence or distress” caused by the Santa’s highly unfestive behaviour.