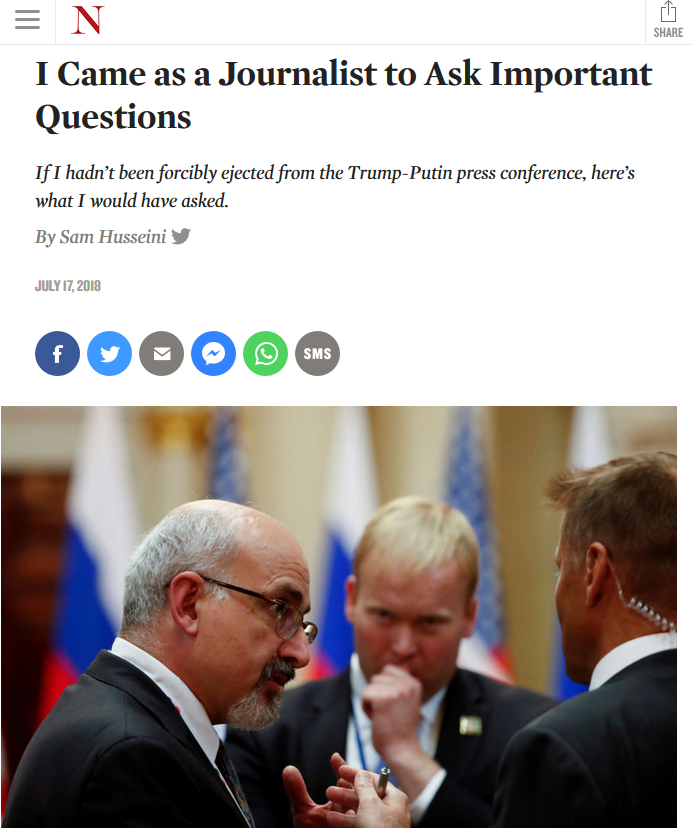 Journalist and FAIR associate Sam Husseini went to the Trump/Putin press conference in Helsinki with press credentials from The Nation and a couple of questions. Specifically, he wanted to ask both leaders why they aren’t living up to their commitments under the Nuclear Non-Proliferation Treaty, and why they’re blocking the Treaty for the Prohibition of Nuclear Weapons. Further, based on the idea that there may be no greater threat than a weapon that is unacknowledged, Husseini hoped to ask Trump if he would acknowledge the existence of Israel’s nuclear weapons.

It wasn’t so quixotic: Reuters (7/12/18) had just reported Trump saying his “ultimate” hope for the summit’s outcome was “no more nuclear weapons anywhere in the world.” But, as listeners may have heard, Husseini, also an analyst at the Institute for Public Accuracy, didn’t get to ask those questions. Before the conference started, Finnish security took him out of the room, saying someone had told them he had a sign. He did have a small piece of paper, reading “Nuclear Weapon Ban Treaty,” that he hoped might draw Trump’s or Putin’s attention, but he was prepared to be told this was against the rules and to hand it over. As he took it out, though, security officers leapt on him, knocked his glasses off, and dragged him out of the room, and ultimately to a detention facility, where they held him incommunicado until the middle of the night. 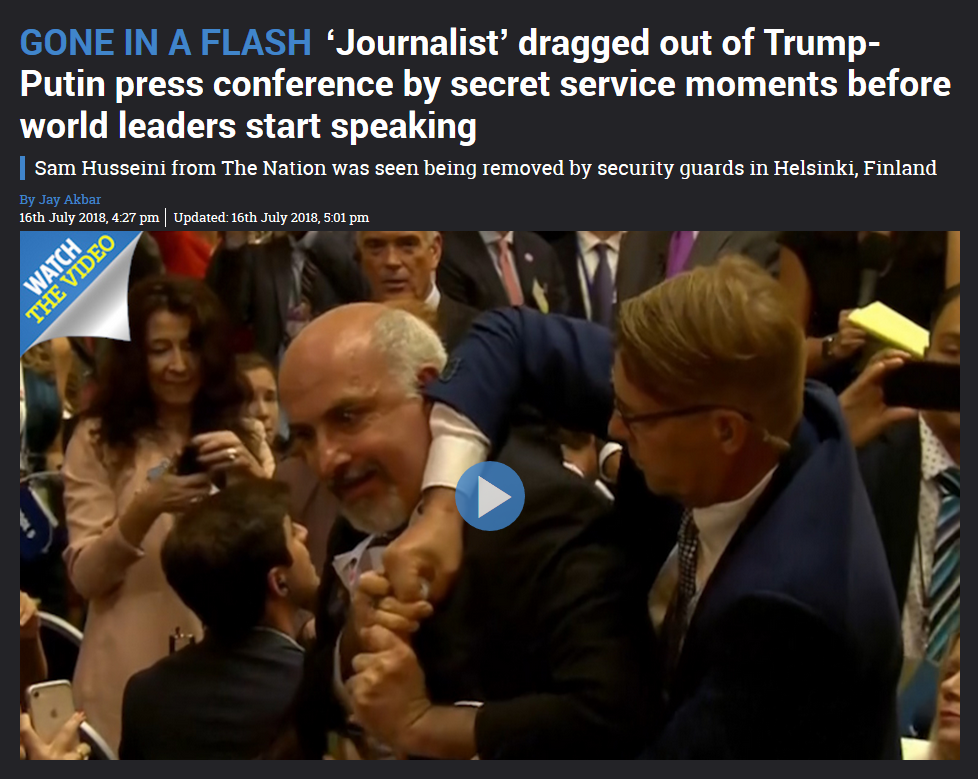 Finnish police couldn’t come up with anything to charge Husseini with. But some media could, implying with quotes around the word “journalist” that Husseini might not be one, or highlighting that he wasn’t hanging out with the rest of the pool. It’s true, Husseini is not one to pal around with corporate reporters and he’s often an unwelcome sight to the political figures he confronts—at the National Press Club and elsewhere—with questions they’d rather avoid.

Confusion about whether it still counts as journalism when it’s challenging to power is as distressing an assessment of today’s elite media as you need, but consider also that, after Husseini’s removal, the press conference went on to leave intact the two leaders’ preferred emphasis on nonproliferation over actual disarmament. It was just that emphasis—more, Husseini argues (The Nation, 7/17/18), about “preserv[ing] the nuclear powers’ monopoly on violence, rather than actually ensuring security”—that he had hoped to interrupt.