Britain has shown images of the people allegedly responsible for the Skripals chemical weapons saga and claimed there were Russian military spies. As the case moves forward, questions remain unanswered about the British narrative.

Right from the start the poisoning attack of Sergei Skripal, a retired double agent, in Salisbury was shaped by the British establishment as a barbaric and reckless attack by the Russian government on a perceived traitor under protection of the British crown. The assertion was a political one, not based on actual evidence. Russia’s request for access to the investigation – a reasonable request considering two of the victims hold Russian citizenship – was stonewalled and any doubts about the narrative dismissed as mere obfuscation.

The latest development on Wednesday went along the same lines. While the investigators themselves were careful to stress that there was no evidence linking the two alleged perpetrators with the Russian government. Prime Minister Theresa May didn’t hesitate to bump up her cabinet’s level of certainty in the Kremlin’s guilt from ‘highly likely’ to ‘certainly’, based on classified intelligence.

The public of course is not allowed to test the validity of this intelligence and has to trust May that the two men were indeed officers of the Russian intelligence service GRU acting on an order from the highest echelons of the government, as she claims. After all, it’s been over 15 years since the public was told to trust their government on Saddam’s WMDs, so who would doubt the intelligence?

Here are some of the lingering questions, which put the dent in the prevailing British narrative of the case.

Poor choice of weapon for assassination

The “weapons-grade nerve agent Novichok” used to poison Skripal and four other people in Britain seems to be a remarkably poor tool for the job. It claimed one life – not that of its presumed intended target – and was swiftly identified by the British authorities, who didn’t wait long to cry “Russia did it” based on its nature.

Soviet Union did develop various poisons, including those that could be used by assassins. Novichok is the nickname given to some, developed under a program called Foliant. There were numerous “Novichoks” developed. Other nations, including Britain, are in possession of samples of the same chemicals that once were researched in the USSR. But the link between Novichok and Russia in the public eye was long established before the poisoning in Salisbury – it even featured in thriller shows.

So the GRU sends agents armed with a faulty weapon that would inevitably be considered Russian after a Russian defector? Well, General Korobov does look somewhat like Mike Myers’ Dr. Evil, so it seems plausible, right?

So the highly-trained Russian assassins planted their Novichok gel or whatever from the fake Nina Ricci bottle to the handle of the Skripal house door, confirmed that their mark contacted the poison and now need to quickly flee the country. What they do with the murder weapon? Do they throw it into the Avon River, which is right there in Salisbury, or use some other crafty way to get rid of the incriminating evidence for good?

No, they throw it somewhere to be found two months later by a struggling couple living in Amesbury, one of whom, Dawn Sturgess, sadly did die from the poison. It seems the executors of the operation were as sloppy as its planners were thick.

It is interesting though that there is no way to tell whether the poison in the fake perfume bottle came from the same sample as the one that was used against the Skripals. It’s the same chemical, for sure, as confirmed by the OPCW, but a number of factors “do not make it possible to draw conclusions as to whether the samples are from the same synthesis batch,” the chemical weapons watchdog reported. So are the investigators certain that the bottle is actually the weapon, as common sense suggests?

The British police used CCTV footage to thoroughly track down the movements of the suspects in Britain. They arrived from Moscow by plane under what is presumed to be false identities, stayed in a hotel room (where they somehow left traces of Novichok) went twice to Salisbury, one for reconnaissance and one for the actual hit and then flew back to Moscow.

It doesn’t seem like the Russian assassins bothered about covering their tracks, right? Why pose as a gay Finnish couple on a honeymoon during a clandestine mission that would land you in jail for life if caught, when you can simply be Boris and Natasha, sorry, Alexander Petrov and Ruslan Boshirov?

However, if the identities were fake, what makes them Russian nationals, yet alone GRU agents? Why not Ukrainians or some other ethnically close nationals or just some white guys who can deliver a good menacing Russian accent? And if the British intelligence did positively identify them, names and rank included, why this call on the public to tell the police who this guys are? Oh, sure, “to protect sources and methods” – the usual mantra of the intelligence community when asked to produce evidence in the latest assessment on Russia’s bad deeds.

Motive is often the weak part of a criminal investigation. People do strangest of things for all the wrong reasons. But the GRU is an organization, which is supposed to act rationally, especially under on order from the Russian government. So what was the goal of this bizarre operation? 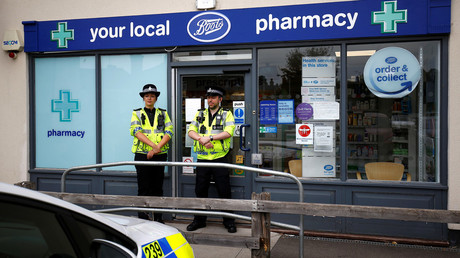 May’s explanation is that Russia wanted to send a signal to Russians living in the West not to mess with Moscow, or something. The message is presumably “we can take any amount of damage to our reputation to get a random double agent, who no longer poses any threat to our nation“. It seems like a geopolitical equivalent of the Tide pod challenge.

The British prime minister would not be baited on Wednesday into naming President Vladimir Putin as personally responsible for ordering Skripal’s death, but let’s not be coy about it. Putin, who indeed has a lot of authority in Russia, is perceived by many in the West as a dictatorial all-controlling figure. So it’s natural that the public is not offered any other explanation in the Scripal case.

Organized crime getting their hands on a Novichok poison? No way, even if it happened in the past. Rogue agents? Certainly not. A false flag operation, which carefully aligned all the evidence to point at Russia? How preposterous!

There can be only one scenario.