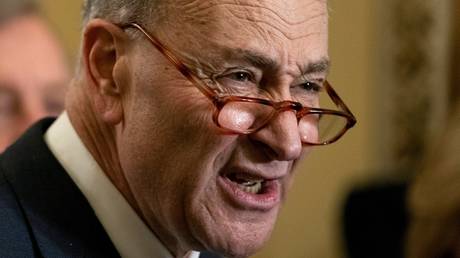 The very same congressional Democrats who maintain ‘Russiagate’ was real are denouncing Attorney General William Barr’s claim there was improper surveillance of the Trump campaign as a conspiracy theory.

Senate Minority Leader Chuck Schumer (D-New York) demanded of Barr to retract his statement, made earlier on Wednesday, that “spying did occur” during the 2016 presidential campaign. Barr “must retract his statement immediately or produce specific evidence to back it up. Perpetuating conspiracy theories is beneath the office of the Attorney General,” Schumer tweeted.

House Democrats were also pushing the “conspiracy theory” talking point on Wednesday, with Judiciary Committee chair Jerry Nadler (D-New York) contrasting it to what he said was fact of Russiagate, and Intelligence Committee chair Adam Schiff (D-California) calling it “another destructive blow to our democratic institutions.”

Though he was supposed to testify about the Department of Justice’s 2020 budget, Barr found himself answering questions about the report by Special Counsel Robert Mueller, which he said showed no evidence of collusion between the Trump campaign and Russia. Unwilling to give up the conspiracy theory they’ve pushed for almost three years, Democrats are demanding Barr release the full, unredacted Mueller report.

“He is acting as an employee of the president,” said House Majority Leader Steny Hoyer (D-Maryland). “I believe the Attorney General believes he needs to protect the president of the United States.”


Barr raised alarms among the Democrats when he told the Senate Appropriations Subcommittee meeting that he believed “spying” – which he later rephrased as “inappropriate surveillance” – into the Trump campaign did take place, and that he intended to investigate that fully.

I am not saying that improper surveillance occurred; I’m saying that I am concerned about it and looking into it, that’s all.

Earlier in the day, President Donald Trump had described the Mueller investigation – and its FBI predecessor – as an “attempted coup,” saying it was based on the uncorroborated ‘Steele Dossier.’ The dossier was produced by a former British spy for a US-based opposition research firm on contract to the Hillary Clinton campaign.

It has been confirmed, however, that the Trump campaign was subjected to FBI surveillance – via former adviser Carter Page – under a FISA warrant secured in October 2016. The warrant application relied largely on the Steele dossier, according to the House Republican memo made public in February 2018. Subsequent revelations have only reinforced the memo’s conclusions.

In September 2018, Trump ordered all documents pertaining to the Page FISA application to be declassified and made public – only to relent within days due to complaints by unnamed “allies” who feared they might get burned by the revelations. The documents remain classified to this day.