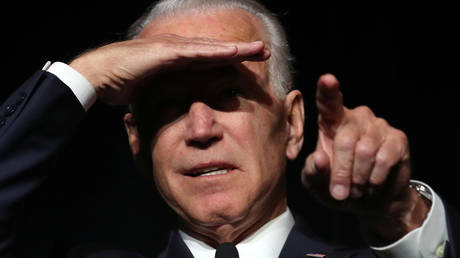 If you thought the 2020 US presidential election might be a Russia-free affair, think again. The latest conspiracy taking hold online asserts that Moscow is behind the controversy over potential candidate Joe Biden’s creepy past.

Social media has long been chock-full of images and videos demonstrating Biden’s overly touchy-feely approach with women he came into (too much) contact with over the course of his political career.

The story grew into a bigger controversy, however, as multiple women came forward to accuse the former vice president of almost-harassment and stepping over personal boundaries in his interactions with them, which prompted many to wonder whether the scandal will hurt his chances if he decides to run for president in 2020, as expected.

Yet, despite the fact that commentators have been reflecting on the Democrat’s cringe-inducing handsy behavior for years, his supporters are smelling a nefarious Russian plot at play.

The entire scandal was probably cooked up by the Russians to “sow discord” within the Democratic Party, one tweeter claimed. Another suggested that the way the Biden story was being spread felt very “Russian-inspired.”

The entire Biden “controversy” smells, to me, like something ginned up by Republicans and Russians, who clearly have an interest in sowing discord in the ranks of the Democrats by taking advantage of the fact that Democrats are indeed interested in preventing sexual harassment.

And the spreading of the story feels very Russian-inspired to me (seeding division). And the worst thing is that it de-legitimizes women who’ve suffered real and harmful incidences of sexual abuse.

Russia has “unleashed” its online “trolls” against Biden…

Not to mention Trump/Russia know Biden is incredibly popular, can work across the aisle to achieve progress in office, and would go after GOP abuses of power relentlessly. No doubt trolls have been unleashed on this!

BEWARE brothers and sisters. The Russian Troll farms are pushin’ the Biden/Flores story hot and heavy. If you see a Putin bot runnin’ wild, alert everyone from the safety of the Tea Pain Train.

Some took things even further, claiming that the so-called anti-Biden campaign wasn’t new, but that Moscow had been “pushing this Biden propaganda for 2 years.”

Russia has been pushing this Biden propaganda for 2 years

Others engaged in full-fledged mental gymnastics, claiming that presidential candidate Bernie Sanders, Russia and the DNC (strange bedfellows) were all behind the “smear campaign” against Biden.

But the loony theories didn’t end there. What if the women accusing Biden of inappropriate touching are Russian “plants” designed to destroy his campaign?

Or a plant by russia/trump because most polls show Biden beating the comrade?

Some pointed out that one of Biden’s accusers is a Sanders supporter with “a political ax to grind” which apparently invalidates her opinions on the former VP.

The people who brought it up have a political ax to grind. In this case, a Bernie supporter @lucyflores brought it up. The strongest candidate to beat tRumpt and this is emphasized? See the forest through the trees.

Maybe Russian President Vladimir Putin is not exactly behind the whole thing, but he and other “outside agitators” will still be “exploiting” it in 2020, another tweeter offered.

I’ve experienced the same thing. What seems to be going on is, agitators from the outside are exploiting Biden etc etc stuff. Ppl with a low tolerance for conflict are getting worked up & attacking any & everyone. Awfully easy for Putin/GOP to manipulate ppl, sadly enough.

There was some pushback against the latest blame-Russia theory, however, with some tweeters calling out the “Russophobic mind-conditioning” that prevents them from thinking rationally and assuming everyone they don’t like is a “Russian operative.”

Can any wrong be done by anyone without you thinking it’s *Russian*?
Pathetic you cannot evaluate the topic in an objective way. Seems you can’t remove the Russophobic mind-conditioning you’ve allowed to be imparted on you. Reduces value of your points.

@Nick_Mellott check it out, any woman who speaks against a center-Dem is now a Russian operative too