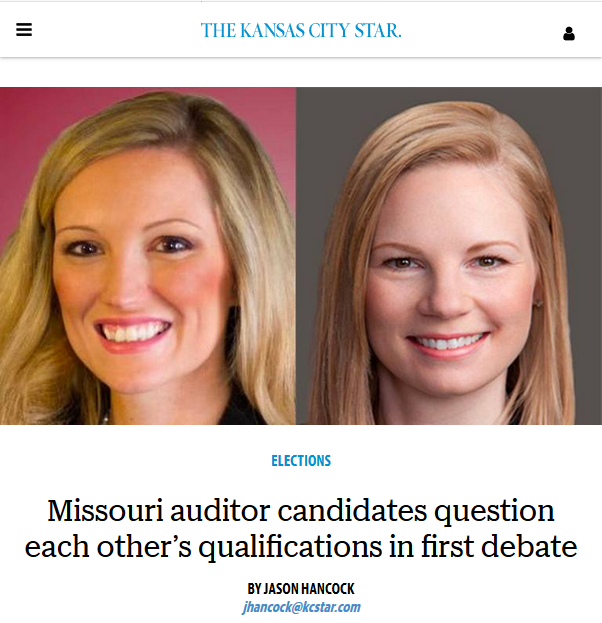 A campaign for state auditor can provoke an intense, even exciting, discussion of significant issues via their cost to government. Or they can sink into boring aspects of state finance. Or politicians can try to turn debates into a circus of insults. Which campaign the voters see depends very much on which aspects news media choose to cover.

As the Green Party candidate for Missouri state auditor, I brought up in the first candidates’ debate (9/14/18) the trial of Monsanto/Bayer, which resulted in a California jury awarding groundskeeper Dewayne Johnson $289 million in July 2018. The jury determined that his terminal illness resulted from use of Monsanto’s Roundup herbicide.

As a Green candidate, I am very aware of environmental dangers of herbicides. I explained that the state auditor should examine how much Missouri spends purchasing Roundup for use on state parks, roadways, and lands surrounding state colleges, universities and governmental offices. After all, with over 8,000 pending lawsuits against such a widely hated agribusiness, continued use of its poisons could put state finances at high risk. 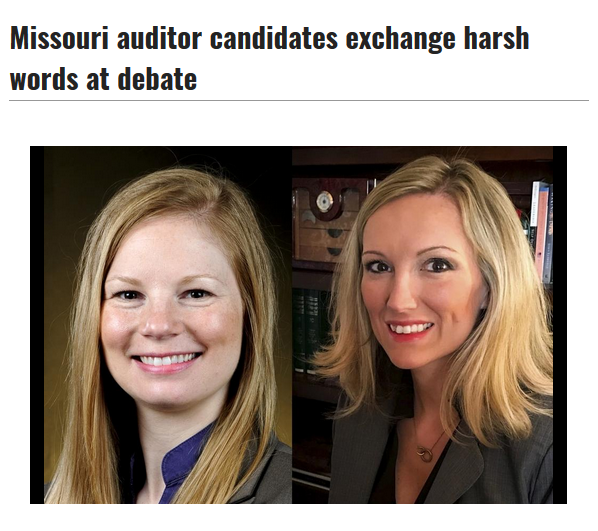 When current Democratic auditor Nicole Galloway described herself as a “watchdog” for the people, the Republican Saundra McDowell sneered, “You’re just a dog.” That made it front and center in each of the five articles. Constitution Party candidate Jacob Luetkemeyer, Libertarian Sean O’Toole and I never impugned anyone, sticking to issues throughout the hour and a half. And none of the issues we brought up were covered afterwards.

Though most Americans want Medicare for All, TV ads by Missouri’s Democrats and Republicans focus on legislative changes that allow health insurance companies to exclude coverage for pre-existing conditions. Of course, health insurance is not the same as healthcare. So I argued that state audits should examine how many taxpayers dollars have been wasted by Missouri’s privatization of healthcare for Medicaid recipients and prisoners. In both cases, state money is devoted to providing profits and covering overhead of insurance companies. An audit would help in estimating savings with a single-payer system.

But none of the five papers mentioned anything about healthcare. Instead, they all addressed how the Democrat attacked the Republican for lying about personal finances, and the Republican describing a lawsuit against the Democrat for violating the state’s Sunshine Law. Stories also included the fascinating discussion of whether or not the Republican had lived in the state for the required 10 years. 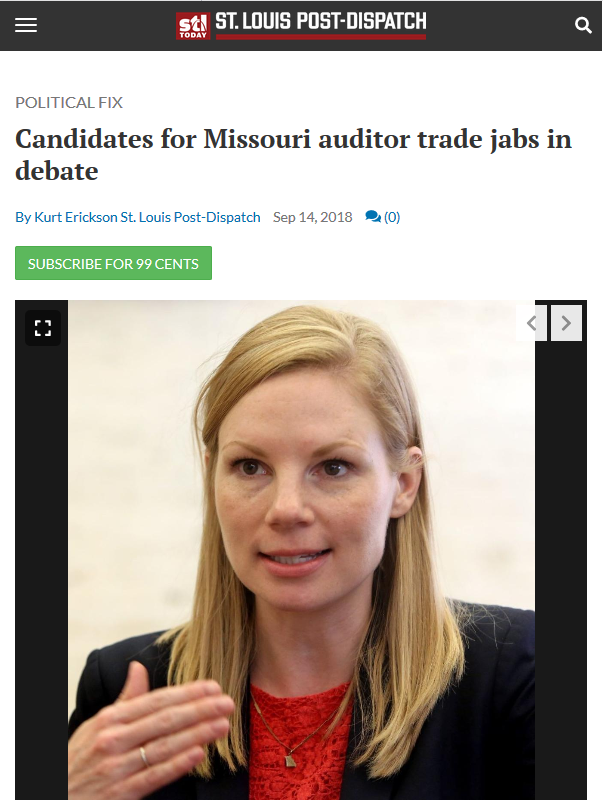 …and “trade[d] jabs” (St. Louis Post Dispatch, 9/14/18). Whether they addressed any issues that affect the lives of the people of Missouri, meanwhile, went unreported.

What the audience responded to most strongly was my comment that they had all smoked marijuana, or knew someone who had—thus a state audit should determine how much Missouri money is wasted policing, arresting, holding, trying and hiring parole officers for continued criminalization of marijuana. That was the only time during the debate that the moderator had to instruct the audience to stop applauding.

Again, all five stories ignored a topic of clear interest to those present. In fact, the stories from across the state were so similar that they could have been written by one person, with the other four just rearranging paragraphs and rewording sentences.

Since the media were oblivious to issues that actually affect people’s lives, I wrote an op-ed and sent it to the three largest papers. Two didn’t respond; but Tod Robberson, editorial page editor of the St. Louis Post-Dispatch, wrote back that it was their “policy” to not run op-ed pieces by candidates. Nevertheless, he invited me to trim my piece to under 300 words and send it to him, which I promptly did. It never ran.

Then, a few days later, the same editor penned an editorial on “Choosing the Best Candidate” (9/27/18), which described the painstaking effort his staff goes through to interview candidates, how staff are verbally abused by candidates, and their internal struggles to be fair to all. He even claimed that they “bring in as many candidates as we can” to interview. What he did not say was that invitations only go to “viable” candidates—a press industry buzzword for those approved by major parties (and backed by corporate money).

Later, the Post-Dispatch (10/10/18) published its endorsement of the Democrat for a series of vacuous reasons: That candidate is a Certified Public Accountant (not required for the office), “exposes corruption” (part of the job) and applies “consistently high accountability standards” (what state auditor does not?). The endorsement bemoaned the failure of the Republican to show up for an interview (thereby admitting that the endorsement was based on a single interview), but didn’t mention the paper’s failure to invite other candidates.

The next day, I attended a forum for candidates for the US Senate from Missouri. Only Green Party candidate Jo Crain and Independent candidate Craig O’Dear showed up. In the audience, I recognized Don Corrigan, who wrote the article on the September state auditor’s debate in the West End Word. We know each other, because he has invited me multiple times to speak about environmental politics to the class on political journalism he teaches at Webster University. 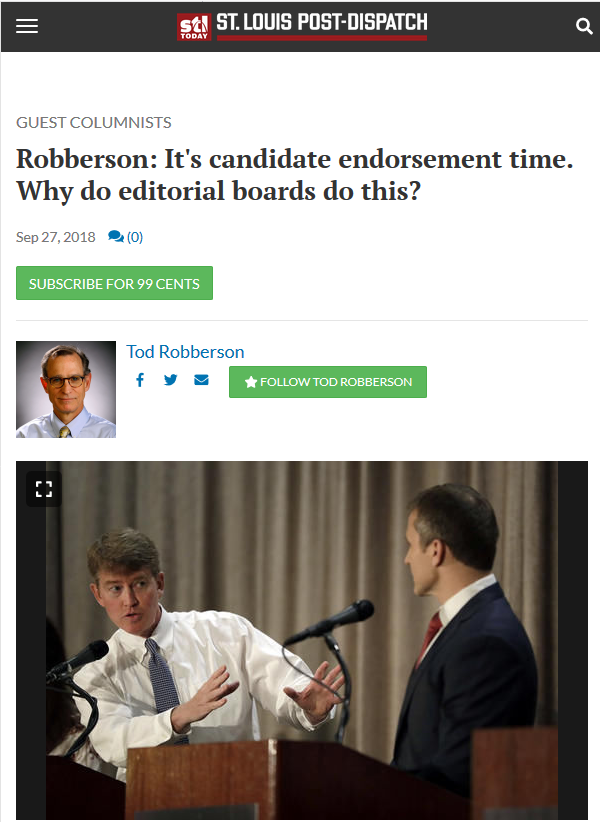 Given how little interest they often show in the policies that affect the public, why do editorial boards endorse candidates? (St. Louis Post Dispatch, 9/27/18)

Afterwards, I went up to him, shook hands, and told him that “it might be difficult for you to write an article about the debate tonight.”

“Because neither of the candidates berated each other; they responded to important issues; and, they are not from the moneyed parties.” I let him know that I was quite disappointed at the way he said nothing regarding three candidates when writing about the auditor’s debate.

“‘Not room?’ Instead of going into detail about the personal attacks, you might have given one sentence to an issue brought up by each of the other candidates.”

“I’m sorry,” he repeated. “But we need to write about what interests our readers, and they just want to know what the Democrats and Republicans say.”

Imagine that! Those who read US newspapers in 2018 apparently have no interest in Medicare for All, being poisoned by Roundup, or whether their friends and family members do jail time for smoking weed. Either local reporters think readers are on the edge of their seats waiting to hear about residency requirements for their state auditor, or they know that their editor will squash stories that give space to candidates who don’t buy expensive ads in their paper.

I just told him, “I feel the pain you endure.”