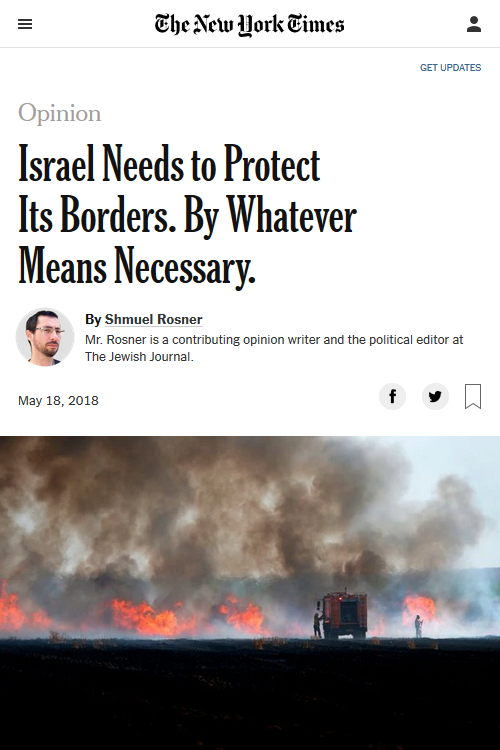 As Israel was killing scores and maiming thousands of protesters in Gaza, rather than calling on Israel to “renounce violence,” the New York Times (5/18/18) published an op-ed arguing that “guarding the border was more important than avoiding killing.”

A FAIR survey of the phrase “renounce violence” in the New York Times over the past 10 years shows that 95 percent of the time the demand is made of Muslim organizations, people or political parties, the most prominent being the Taliban and Hamas. There are zero instances of anyone in the Times—whether reporters quoting officials or columnists—from March 28, 2009, to March 28, 2019, insisting or suggesting that the United States, Israel or any white-majority country “renounce violence.”

Almost half—48 percent—of the instances of “renounce violence” in the New York Times during the time period asserted that Palestinians “refused” to “renounce violence.” This was typically signaled with an umbrella label of “Hamas,” with varying degrees of specificity. Roughly a third of those said to not “renounce” violence were either Afghan or Iraqi insurgency groups fighting American military occupation. Thus, roughly 80 percent of the time, the term was evoked to describe people under military control of Israel or the US.

Of the 58 examples found of the phrase in the Times from 2009 to present day, only three instances expressed a demand that non-Muslims “renounce violence”: The Czech government (12/22/09) threatening to ban the Communist Party; Turkish criticism (7/29/10) of the Kurdistan Workers’ Party (PKK), a secular Communist party, though Kurds are mostly Muslim; and a report (2/5/17) on Obama’s commutation of Oscar López Rivera that noted the longtime Puerto Rican independence advocate “refused to renounce violence.”

The complete list can be viewed here. The New York Times was selected as the focus of the study due to its position as the US’s most influential newspaper.

It’s not clear why no reporters, columnists or experts quoted ever felt the need to ask the White House or the Pentagon, or any of their friendly allies in Britain, Israel, Saudi Arabia or Turkey, if they would “renounce violence.” The expectation that a party should refuse to engage in armed activity as a means of exerting political influence was almost exclusively reserved for those under military occupation from Western forces or their Middle Eastern allies.

Before the time frame of the survey, South African leader Nelson Mandela was often scolded in the Times opinion pages for refusing to unilaterally reject violence. “Why Won’t Mandela Renounce Violence?” asked a June 21, 1990, op-ed by congressional aide David G. Sanders. There’s no evidence in the Times archives that South Africa’s apartheid government was ever asked the same question.

For decades, Amnesty International infamously refused to label Mandela a Prisoner of Conscience because he wouldn’t formally pledge to refrain from violence—a rather precious, morally boutique demand Amnesty requires of all of its Third World causes. In the Western liberal mind, we can name oppressors, but never support those actually fighting them, instead demanding the oppressed unilaterally refuse the single most ubiquitous political tool in history—that of violence.

There are also instances prior to the survey period of the phrase being applied to white people—when they were also under Western occupation. From the 1970s to the 1990s, the Times made several mentions of Irish resistance fighters under the British occupation of Northern Ireland “refusing to renounce violence.” In this context, as well, there was no mention of Britain’s refusal to do so. 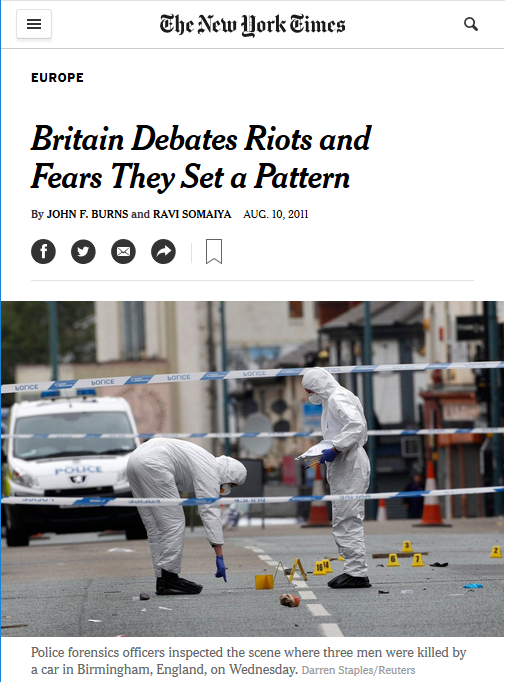 Vows by Muslim and Sikh groups to “fight  back” against anyone who threatened their neighborhoods prompted the New York Times (8/10/11) to highlight a call to “renounce violence.”

During the 10-year survey period, other than Czech Communists and López Rivera, the only people in the West needing to “renounce violence” were Muslims—in a bit of editorializing during the 2011 London riots from Times reporters John Burns and Ravi Somaiya (8/10/11), suggesting the father of a person who had died during the unrest was appealing “for all in the community to renounce violence.” The community in question, according to the Times? London’s “Muslim populations.”

Hamas is regularly said, almost like it’s required by the Times style guide, to be failing this arbitrary moral test. Pro-Israel columnist Roger Cohen has evoked the phrase three times since 2009. The “refusal to denounce violence” box-checking was especially popular with Times Jerusalem chief Jodi Rudoren, who used the cliche five times in 2014 alone in reference to Hamas—the same year Israel’s violence killed 1,500 Palestinian civilians, including 523 children. During that same conflict, “Hamas violence” claimed the lives of six Israeli civilians. At no point in her coverage during this time did Rudoren mention that the IDF had, like Hamas, refused to “renounce violence”—and were exceedingly more efficient at carrying it out.

Demanding Iraqi or Afghan insurgents or Hamas “renounce violence” is, of course, a defensible moral stance. One could argue that their religious-infused militancy is reactionary or counter-productive. (Just this month, thousands of Palestinians protested Hamas in Gaza.)

But that’s not really the issue here. The issue is the wholly selective and loaded manner in which this burden is applied. Why should only these groups—Muslim 95 percent of the time—“renounce violence,” but the US and its allies never have to? What makes the West’s arbitrary, violent occupations per se justified, while less sophisticated counter-occupations who refuse to go full Gandhi are committing a profound moral transgression? There is no sense to it, other than serving a lazy, racist rhetorical tic. Ask Muslims to “renounce violence,” by all means, but maybe, at least every now and then, ask non-Muslim militants to do so as well.