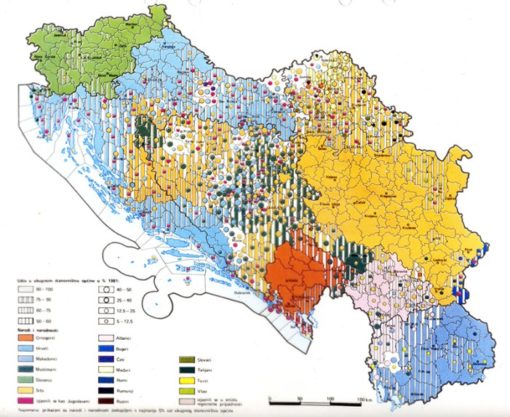 The ethnic map few understood. Should make it clear that cutting up Yugoslavia in independent republics could not be done without bloodshed.

March 24, 2018, marks the 19th anniversary of NATO’s illegal and illegitimate bombing of Yugoslavia, Serbia and its Kosovo province during 78 days. It has – one is tempted to say, of course – been conveniently forgotten by the West itself.

While Clinton may be best remembered for his relations with Monica Lewinsky and his wife, Hillary Clinton, some of us also remember him (and Albright) for bombing Afghanistan, Sudan, Bosnia-Hercegovina and contributions to the proportionately largest ethnic cleansing in Yugoslavia – of Croatian Serbs out of Croatia’s Krajina, Eastern and Western Slavonia where they had lived for about 400 years, in Operations Storm and Flash in 1995.

Clinton was also the President who started the expansion of NATO against assurances about never doing so given by leading NATO politicians to Mikhail Gorbachev. But the former Yugoslav republics are now NATO members (Slovenia, Croatia and Montenegro). Clinton also upheld…