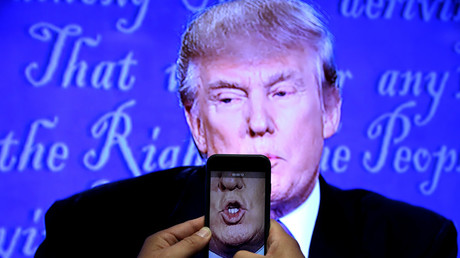 One year ago, ‘covfefe’ entered the world’s vocabulary due to a tweet by President Donald Trump. RT looks back at some of Trump’s craziest tweets since he became president.

Trump uses Twitter as his primary mode of communication with the world, delivering policy positions and bestowing catchy nicknames on his enemies.

Most Americans think the president tweets too much – 72 percent, according to the new POLITICO/Morning Consult poll, while 62 percent think his tweeting is “a bad thing.”

Though his original “Despite the constant negative press covfefe” tweet was deleted, Trump left a follow-up message about the term that remains a mystery to this day.

Who can figure out the true meaning of “covfefe” ??? Enjoy!

Trump has spent much of his presidency tweeting denials of “collusion” with Russia and accusing Democrats of the same. Over the last year, Trump has lashed out at the Democrats countless times.

Why aren’t the 13 Angry and heavily conflicted Democrats investigating the totally Crooked Campaign of totally Crooked Hillary Clinton. It’s a Rigged Witch Hunt, that’s why! Ask them if they enjoyed her after election celebration!

One of his biggest bombshell tweets was when he revealed Obama had his “wires tapped.”

Terrible! Just found out that Obama had my “wires tapped” in Trump Tower just before the victory. Nothing found. This is McCarthyism!

Trump has made some of his most memorable tweets about North Korean leader Kim Jong-un – from deriding his appearance to boasting about how his “button” is bigger than Kim’s.

Another favorite target for Trump is the media. From calling out multiple “fake news” outlets to slamming ratings, when it comes to the media, Trump is rarely kind.

Sometimes this criticism gets personal. Trump came under fire for a series of tweets attacking the appearance of MSNBC anchor Mika Brzezinski, alleging she had both a low IQ and a botched face lift.

…to Mar-a-Lago 3 nights in a row around New Year’s Eve, and insisted on joining me. She was bleeding badly from a face-lift. I said no!

The president has more than 52.2 million Twitter followers and has tweeted more than 37,700 times since opening his account in March 2009.