The Central American refugee “caravan” came to dominate both the liberal and conservative news cycles during the 2018 midterm elections and beyond, with President Donald Trump’s continual proclamations on the issue making national news, setting the agenda on how the media report it. 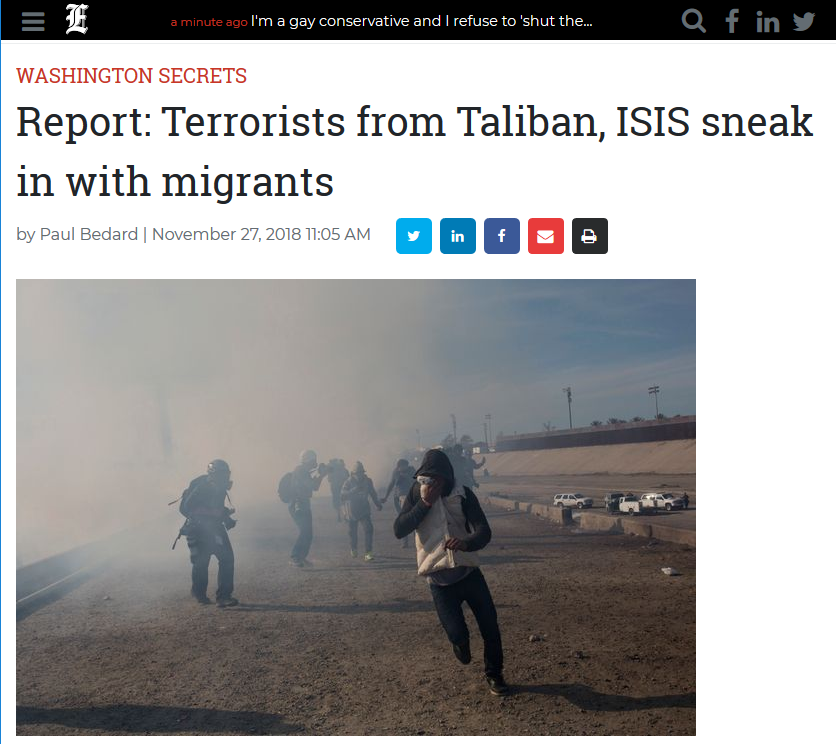 This Washington Examiner story (12/8/18) is based on a report from the Center for Immigration Studies, identified as a hate group by the Southern Poverty Law Center.

Conservative outlets have generally mirrored Trump’s “xenophobic” and “nativist fearmongering” (FAIR.org, 11/15/18), emphasizing the danger, criminality and delinquency of the migrants. The Washington Examiner (12/8/18) claimed that a number of Taliban and ISIS operatives had tried to cross the border, and that MS-13 had infiltrated the caravan (11/28/18). This tone was echoed by Fox News (12/2/18), who highlighted the migrants’ supposed dirtiness, with Griff Jenkins reporting:

Filthy conditions indeed. Take a look behind me…. Look at this pile of trash they pulled out of [the migrant camp]. It was intended originally for 1,000. There were more than 6,000 in there. More than 60 per cent ended up with the flu, all sorts of issues, you had chicken pox, tuberculosis, other things. Within this caravan was a convicted murderer from Honduras, 46-year-old Miguel Angel Ramirez.

Fox (11/26/18) consistently dehumanized the refugee caravan, with Fox & Friends host Pete Hegseth defending Trump and justifying the use of tear gas by US Border Patrol agents, claiming they “bum-rushed the border,” and asserting, “When you throw rocks and bottles at border patrol agents, you’re going to get tear gas in your face, as you should.”

Centrist news outlets are similarly focused on the caravan, but were more sympathetic or neutral in their portrayal of migrants, often presenting them as victims (CNN, 11/26/18) or “targets” (CNBC, 11/13/18) of Trump’s rhetoric in order to criticize the president. Yet all sides appeared to be critical of the media’s reporting of the story in general, calling for more context.

Fox News (11/27/18) criticized the coverage, asserting the caravan was using women and children as human shields and PR pawns. “We are not getting comprehensive information from the border, we are getting storytelling,” Republican strategist Pete Holmberg asserted, while Fox News Democrat Jason Nichols claimed, “We need a holistic view on what’s going on at the border.” 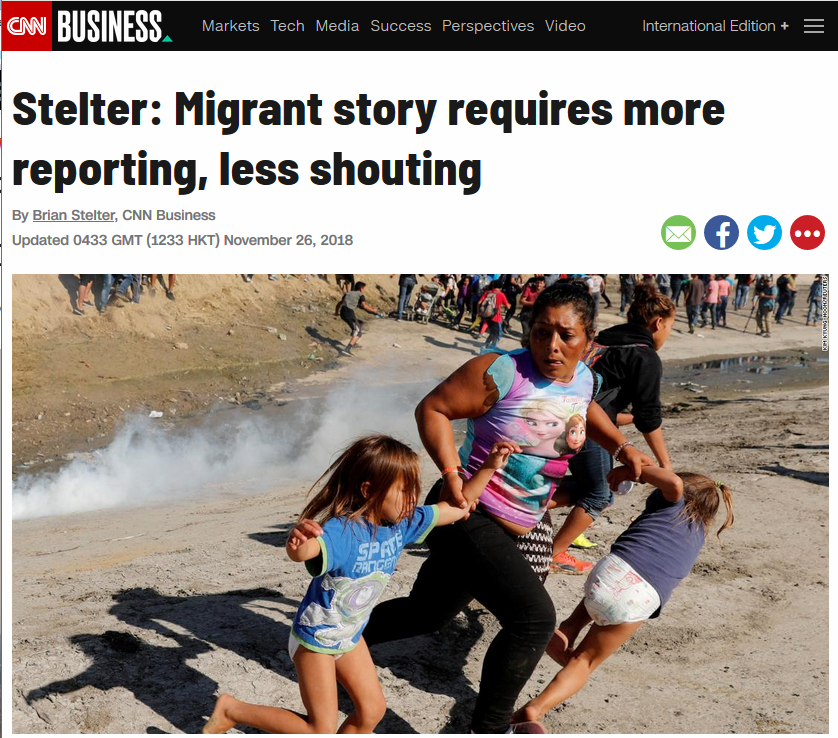 CNN (11/26/18) quoted the Washington Post‘s Karen Tumulty as saying that journalists had used the “caravan” story to  “dig deeper into the forces that put people on this treacherous path of migration.” What those forces were was left to the reader’s imagination.

Meanwhile, CNN (11/26/18) was equally critical, calling for more nuance: “As is so often the case, these situations call for more reporting, less shouting.” This is something we at FAIR (7/22/18) have also called for, as the history of Honduras and the other Central American countries the migrants primarily hail from (Guatemala, El Salvador, Mexico)  is particularly illuminating.

Economically, those countries were shattered by the North American (NAFTA) and Central American (CAFTA) Free Trade Agreements, which lifted barriers protecting tens of millions of farmers from competition from massive, highly-subsidized US agribusiness giants. These immediately flooded the Central American market with cut-priced grain, impoverishing and bankrupting millions of farmers, who moved to increasingly overcrowded slums in the cities to compete for progressively fewer jobs, further driving down wages.

The Institute for Agriculture and Trade Policy describes the main effect of NAFTA as “the devastation wreaked on the Mexican countryside by dramatic increases in imports of cheap US corn.” Unemployment almost doubled in Mexico (going from 3.7 percent to 6.2 percent), while poverty jumped from 37 percent to 46 percent of the population in a matter of months. Both problems continue to plague the country.

The unemployment, poverty and overcrowding fed into an epidemic of violence—due in no small part to the US drug war, the consequences of which are felt more acutely outside its borders than inside. It was a similar story in the smaller Central American states after CAFTA passed in 2006.

The US supported the overthrow of the democratically elected Honduran President Manuel Zelaya in 2009 and his replacement with a military dictatorship, led by a graduate of the notorious School of the Americas, a US army institution where many of Latin America’s most violent dictators were trained. The United Nations and the Organization of American States rejected the coup, but Secretary of State Clinton played an important rule in strategizing a successful plan to “render the question of Zelaya moot,” in her own words.

The new government presided over a sharp escalation of political violence, helping the homicide rate in the country become the highest in the world. Zelaya had raised the minimum wage and presided over a number of anti-poverty programs. However poverty shot up after his removal, from 44 to 66 per cent of the population between 2009 and 2016.

This is to say nothing of the numerous dirty wars the US sponsored in the region throughout the late 20th century, which brought with them genocidal dictatorships, civil wars and coups, leaving the region permanently scarred and directly contributing to the current refugee crisis. Nevertheless, there is no discussion of the crisis as “blowback” for US policy (FAIR.org, 7/14/14). 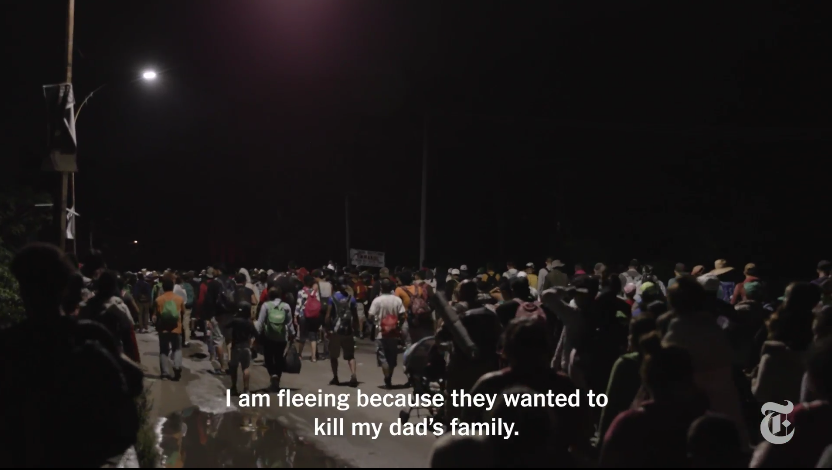 Who “they” are is not further identified in this New York Times video report (10/26/18) on the refugee caravan.

Indeed, there is very little discussion of why refugees are so desperate to leave their countries and travel to the US. A previous FAIR study (7/17/18) found that immigrant voices are notably absent in reporting on immigration. When any explanation is given for why people are migrating, it is extremely shallow—for example, that a gang threatened to kill them (NPR, 11/22/18) or their family (New York Times, 10/26/18), or that “they had a dream” to go to the US (New York Times, 11/30/18).

Even when journalists travel to Chiapas in Southern Mexico to travel with the caravan, the level of insight into this question is low. One CNN report (11/26/18) noted that “they are traveling in search of jobs” as there are “no jobs” in Honduras; one migrant said “he wants a better life for his 2-year-old son,” while one transgender migrant was “escaping hate and persecution.”

The crucial and logical next question of why there is so much violence, poverty and unemployment is not addressed, perhaps because doing so would necessitate looking at successive US governments’ active roles in the region. Using migrants to attack or defend Trump is possible, but principled criticism of US foreign policy is off the table, it seems.