Ex Caserma Liberata, Bari, Italy — Some four years ago, a group of (mostly) anarchists occupied the premises of what was once a military barracks (caserma in Italian) in Bari, a port city at the top of the heel of Italy’s boot. They collectively took over 8 hectares (20 acres) in the heart of the city and began carving out a rather significant social center in the shadow of multi-story brick and glass apartment buildings. Soon realizing that 8 hectares in a large metropolitan area was a little too much territory for a few anarchists (and their fellow travelers) to occupy and defend or cultivate, they reduced their size to 2.5 hectares, which is still a hell of a lot. I suspect, from what I’ve seen here, that there are many political tendencies included among the residents and supporters of the Ex-Caserma besides the predominant anarchism, but as Pippo, says, “we are united by antifascism.” 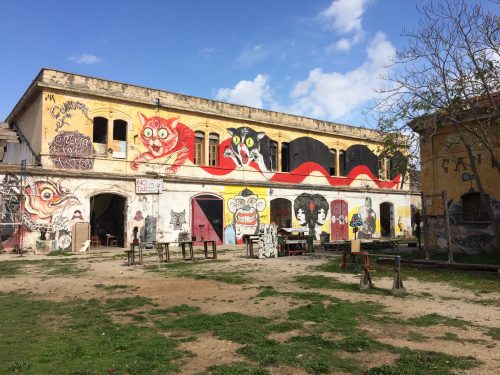 Pippo, the poet, set up my visit to the Ex-Caserma Liberata and arranged for me to show Arturo Albarrán’s and my movie, In the Shadow of the Revolution, one week before I head off to show it at the London Anarchist Book Fair. Pippo is the founder of the Revolutionary Poets Brigade of Bari and as he takes me through the city he laughs as he points out the poems along the way that he’s wheat-pasted on walls, electrical boxes, light poles and anywhere else they’ll fit. Pippo laughs a lot. But his English and Spanish are as minimal as my…