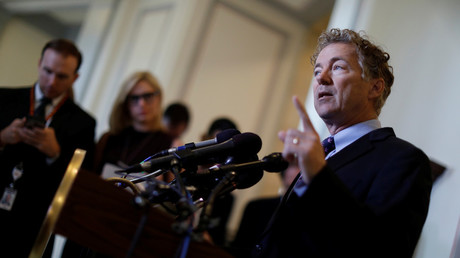 Republican Senator Rand Paul will introduce an amendment that would lift existing US sanctions on members of Russia’s Federal Assembly if Moscow agrees to nix its own sanctions targeting US lawmakers, according to the Daily Beast.

Paul will present the legislation during a Senate Foreign Relations Committee meeting on Wednesday, the Daily Beast, which obtained the text of the amendment, reported.

But with Democratic members still in full Russiagate mode, it’s unlikely that the amendment will make it past committee. Democratic Senator Jeanne Shaheen, who is currently banned from traveling to Russia, told the Daily Beast that she saw no need for the amendment, claiming that it would merely be “a capitulation to Putin’s aggression.”

The legislation, however, has a simple, practical purpose – to allow Russian lawmakers to visit the US and confer with their American counterparts.

Paul is one of a handful of top US lawmakers who have called for more dialogue with Moscow. The Kentucky senator made two separate visits to Moscow – the first in July, followed by a second visit the next month – to find“common ground with [Russian] leaders and help prevent further, unnecessary escalation of tensions.”

I was honored to deliver a letter from President Trump to President Vladimir Putin’s administration. The letter emphasized the importance of further engagement in various areas including countering terrorism, enhancing legislative dialogue and resuming cultural exchanges.

During his trip in August, he invited members of Russia’s Foreign Affairs Committee to come to the US to “meet with us in Washington.”

He said at the time that he was working with Konstantin Kosachev, chairman of the foreign affairs committee, to organize a meeting between US and Russian lawmakers in a neutral, third country.