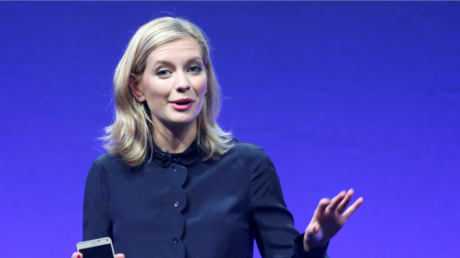 Britain’s favorite TV math genius Rachel Riley has spooked fans of the hit numbers and letters show Countdown with a social media confessional seemingly admitting she gets fed her quick-fire answers through an earpiece.

Riley, who took over from Carol Vorderman as co-presenter of the daytime quiz show back in 2009, is famed for her incredible ability to solve numerical problems in a matter of seconds.

The 32-year-old has now posted a mysterious revelation on Twitter, in which tells fans she has a confession to make.

“I’m bad at maths. I get fed the answers in an earpiece. I don’t think it’s the worst thing in the world but at times I feel like a bit of a fraud,” she states.

Riley’s online video has shocked many people, with one fan responding that their “universe just exploded.” Another person spoke of their “heartbreak” at hearing the news.

Hear that? That’s the sound of hearts breaking!

One fan even went as far as to say they are finished with watching the Channel 4 program.

The fact you are honest about it and have the guts to come out and say it is testament to the person you are! Never have anything against honest people. Well done Rachel!

If Carol Vorderman is behind the camera forcing you to say this at gunpoint, BLINK TWICE!!………

If true, the revelation would be a shock given Riley has a degree in mathematics from Oxford University. However, not everyone is convinced the math whizz is telling the truth, with some speculating that her confession is part of another TV show or an online prank.

One man suggested that perhaps Riley was engaging in some good old fashioned trolling.

I think she’s trolling the trolls. She’s brighter than a lighthouse