After right-wing billionaire Joe Ricketts shut down the local news site DNAinfo last year, one week after the outlet’s New York City workers unionized, there was justifiable outrage. The move highlighted the dangers of corporate and billionaire-backed media capriciously operating under the umbrella of the super wealthy, who would fold rather than recognize basic labor rights.

After the initial shock, employees at DNAinfo Chicago announced they were effectively re-opening the brand under a new name, Block Club Chicago, with a new funding model—one seeded by an inspired KickStarter that raised over $180,000. Founded as a nonprofit and underwritten by foundation support from groups like Civil, Block Club Chicago was to usher in a new era of local reporting, promising “nonpartisan and essential coverage of Chicago’s diverse neighborhoods.”

Except Block Club Chicago suffers, particularly on the issue of “crime” reporting, from the same stunted ethical scope all other local corporate media does. Again and again, Block Club’s “crime” reporting consists of simply copy-and-pasting Chicago police blotters about alleged crimes, with no effort to report any side other than the police’s. When they do engage in actual reporting, the vast majority of the time, it’s just more police stenography. 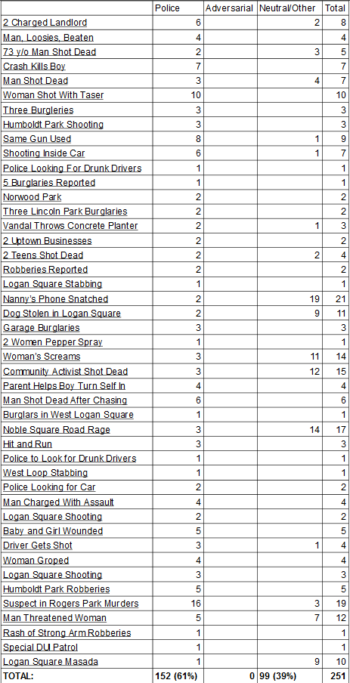 A survey of Block Club’s crime reporting from a two-week span (9/19/18–10/3/18) found that 61 percent of all sourced claims in their “crime” articles came directly from the Chicago Police Department. Thirty-nine percent were from non-police parties (almost entirely victims of crimes, their families or their legal teams). There were zero claims or quotes from adversarial sources, such as defense attorneys, accused persons or local activists watchdogging the CPD.

In addition, these stories often ended with a plea to the reader to call a snitch line (“Anyone with information is urged to call detectives at (312) 744-8263” is a common tag) so they can, presumably, report suspicious activity—deputizing vigilante readers to go on the hunt for criminals. This is a common feature for local media; “crimestopper” local TV news does it routinely (FAIR.org, 9/20/17). But is this feature—passing along scary crime stories uncritically, while insisting the public call the cops on anyone deemed suspect—something a nonprofit, community-oriented paper should be doing?

The first problem is journalists shouldn’t, as a matter of course, be copy-and-pasting press releases of any kind—doubly so when the press releases are disseminated by people in power. Repeating government claims is bad enough, but literally publishing press releases with no original reporting or questioning of the underlying claims, while insisting readers Do Their Part to help the state, is a whole other level of stenography. The reality is Block Club Chicago has made no effort to ascertain whether most of these alleged crimes even took place (something its own reporter acknowledges on social media).

In the context of the extremely charged Jason Van Dyke trial which had just got underway in Chicago (involving a white police officer who shot and killed black 17-year-old Laquan McDonald in 2014), could the CPD be hyping up crime trends in neighborhoods with a sizeable amount of white liberals sympathetic to Black Lives Matter? Could the underlying robberies indeed be happening, but the CPD is selectively highlighting some for political purposes? Could the CPD be concentrating resources on gentrifying neighborhoods (like Wicker Park and Logan Square, frequent settings for Block Club police stories) because—as study after study shows—that’s what police institutionally target?

“Crime” reporting that doesn’t consider these factors, much less interrogate them, isn’t engaging in journalism, it’s engaging in PR. And with a public relations budget well over $1 million, this isn’t something the Chicago Police Department needs Block Club to do pro bono. Even Obama’s Department of Justice acknowledged that Chicago cops have been repeatedly caught lying about “force incidents”—and have a pattern of “unreasonable killings” and racist harassment. So why should journalists take that same departments’ claims at face value?

The second problem with this approach is what we consider “crime.” This is an institutional problem, and one that’s perhaps unfair to ask small media organizations like Block Club to unpack, but there’s a degree of mindlessness in “crime” reporting that’s in urgent need of rethinking. According to the Economic Policy Institute, wage theft in the United States is greater in scale than all personal larceny, robbery, burglary and car theft cases combined. Which is to say, in monetary terms, the most common crime scene is the workplace, and the most common criminal is the executive or middle manager who steals money from workers. (And not in the theoretical Marxist way; we’re talking about actually stealing money legally owed to workers.)

Thus far, since its launch eight months ago, Block Club Chicago hasn’t done a single story on wage theft, a particularly egregious omission given the near-impunity for wage thieves in Illinois. Why is that? Certainly there are waiters and bussers and cashiers and domestic workers who can be canvassed, and asked about this problem. The institutional, one-sided focus on “crimes” done by one-off, often poor individuals resonates, perhaps, because of its visceral nature—certainly being held up with a gun is more frightening to the average reader than not being paid for working a shift. But why ignore entirely the iteration of crime that constitutes more than half of all theft?

And if the excuse is Block Club covers sensationalist or visceral crime, this doesn’t hold up either. Certainly shoplifting and other petty larceny is no more sensational or “violent” than wage theft, but Block Club has found time to report on these great injustices time and again, complete with plastering the mugshot of an African-American shoplifting suspect right on the front page. 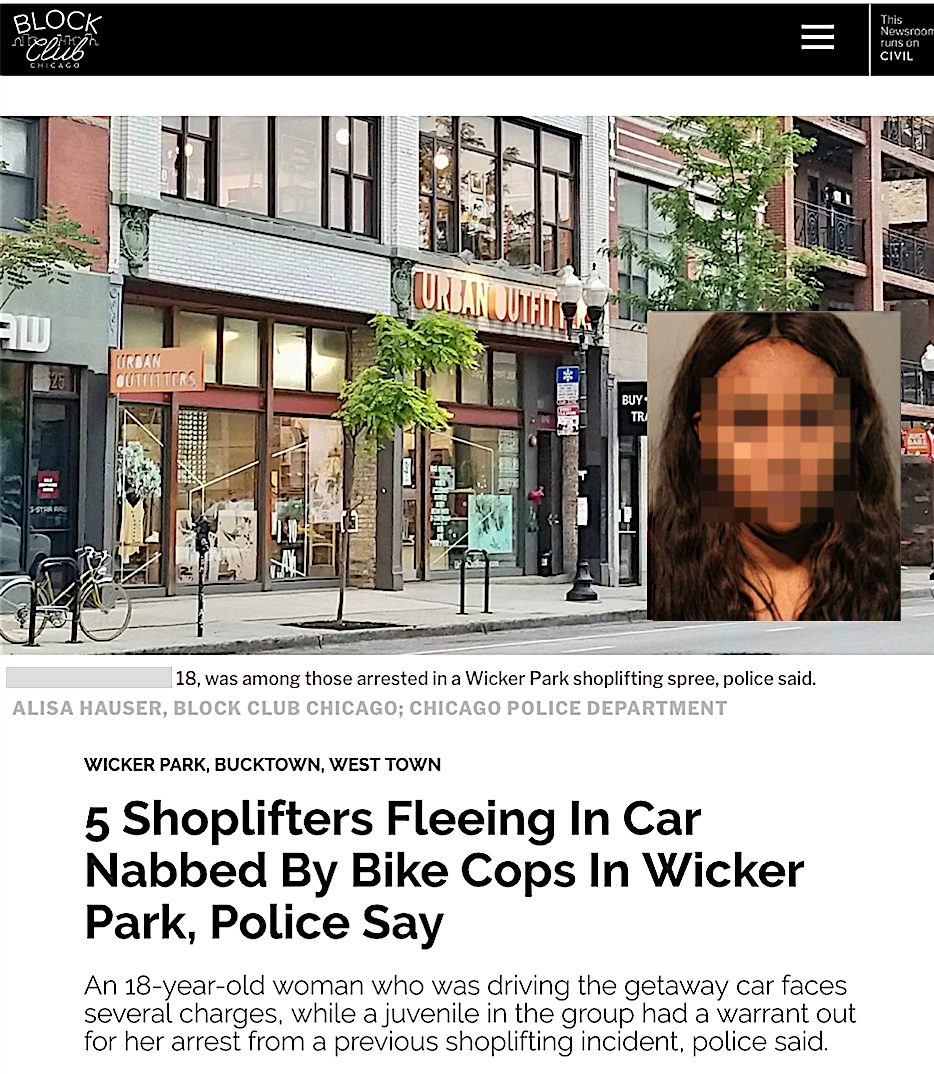 The sleazy tabloid practice of plastering on the front page the mugshots of people who haven’t been convicted of anything is common fare at Block Club Chicago.

Indeed, the sleazy tabloid practice of plastering mugshots on the front page before those individuals have seen a judge, much less been tried or convicted of anything, is common fare at Block Club. This practice—again, routine in local media (FAIR.org, 4/25/16)—forever sullies people’s SEO, indelibly associating their name and face online with criminality for all future employers, prospective partners and loved ones to see.

Could the CPD have made a mistake? Got the wrong person? Framed someone? These questions are totally unimportant to the vigilantes at Block Club Chicago. Presumably this practice is to warn people of what a suspect looks like, so they can partake in further vague notions of vigilance or vigilantism, but what of the rights of those arrested? What of their baseline humanity? Are they not in the “local” communities Block Club claims to serve? The harm wrought by mass distributing a mugshot is not theoretical and, once published for internet posterity, cannot be undone.

In fairness, Block Club does cover issues of gentrification, community outrage at police, and activism in a semi-sympathetic manner (though these stories are a trickle compared to the nonstop deluge of “crime” headlines that often take up half or three-quarters of the front page). And, again, it’s important to note these problems are not unique to this publication. These are routine, unexamined tropes in local reporting across the United States. Reporters and editors are overworked and under pressure to push out articles, and likely don’t see anything per se wrong with repeating PD statements that provide a nonstop supply of titillating, click-ready content. But this doesn’t mean everyone should just accept this brand of reporting as a law of nature. We should, instead, ask basic questions about why the genre exists in the first place.

What purpose does it serve beyond turning newsrooms into de facto PR agents for the state? What’s the social benefit to treating police departments’ word as fact? What’s the good in ruining young African-Americans’ and Latinos’ lives by plastering their names and photos online, purely on the say-so of local police? Why is “street” crime the only crime that matters, whereas rampant wage theft, worker abuse and white collar crime are never something “local” news feels the need to cover?

Much of the journalist community understandably rallied around DNAInfo workers when their publication was shut down by a craven billionaire. And it was broadly seen as positive when they relaunched with the stated mission of bringing “local news” to places that didn’t have any.

But “news” is not a morally neutral enterprise, local or otherwise. It ultimately serves certain interests more than others. Whose interests are served when the bulk of the “crime” reporting is little more than rehashed police statements? Block Club claims in its mission statement to be “nonpartisan,” but a cursory review of its “crime” output reveals it very much serves a party—the Chicago Police Department.