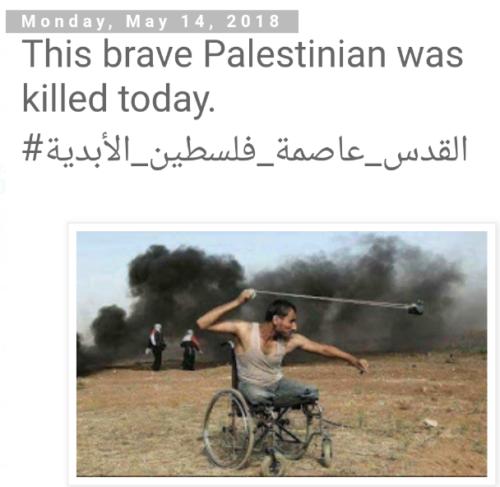 Fadi Hassan Abu Salah, killed by Israeli sniper on May 14, 2018 in Gaza

Psychopathic: (Adjective) Suffering from or constituting a chronic mental disorder with abnormal or violent behavior.

This is Oxford’s best shot at describing a condition I feel quite comfortable framing within its succinct parameters the State of Israel, the vast majority of its population – if the analysis of Max Blumenthal and Norman Finkelstein mean anything – the disease of Zionism, a highly virulent form of theocratic nationalism, as well as that country’s primary enabler – the greatest purveyor of terror on earth – the United States.

The instantly iconic photograph of Fadi Hassan Abu Salah, a double amputee who lost his legs during an Israeli carpet bombing of the Gaza called Operation Cast Lead in 2008 was murdered by a sniper Monday, May 14th in the context of an Israel now completely unfettered.  From the Nakba or catastrophe of 1948 – the forced displacement of Palestinians numbering in the many hundreds of thousands from their homes and homeland marking the genesis of Israel’s blood soaked breech birth – to the present moment, there have been, to be sure, many, many worse slaughters by the Israeli Defense Force (IDF) and its various precursors, but the non-violent nature of this particular act of Palestinian resistance, The Right of Return, has placed Israel in the untenable absurdity of ascribing kites as lethal weapons of Hamas.

Not that Israel has the least…