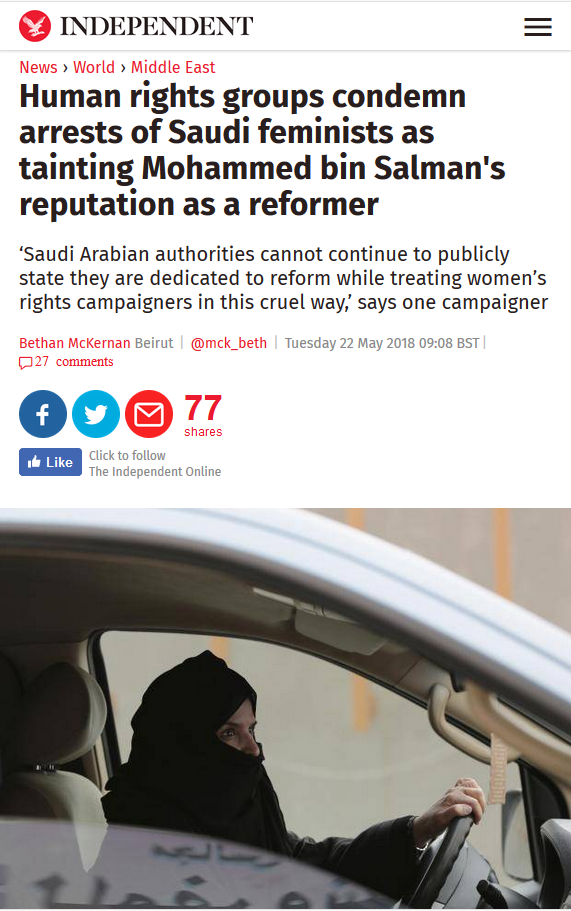 “It appears the only ‘crime’ these activists committed was wanting women to drive before Mohammed bin Salman did” (Independent, 5/22/18).

During his US PR tour in March, Saudi prince and de facto ruler of the absolute monarchy Mohammed bin Salman (often referred to as “MBS”) touted the progress the kingdom was making in the area of “women’s rights”—namely letting women drive and combatting nebulous reactionary forces that were somehow separate from the regime.

Since then, at least seven major women’s rights advocates—Eman al-Nafjan, Loujain al-Hathloul, Aziz al-Yousef, Aisha al-Manea, Madiha Al-Ajroush, Walaa Al-Shubbar and Hasah Al-Sheikh—have been detained by Saudi authorities and, according to at least one report (Middle East Eye, 5/22/18), may face the death penalty.

Two of the biggest media corners that helped sell bin Salman as a feminist reformer during the trip and the months leading up to it—the New York Times opinion pages and CBS News’ 60 Minutes—have not published any follow-up commentary on bin Salman’s recent crackdown on women’s rights campaigners (Independent, 5/22/18). Let’s review their past coverage:

The 60 Minutes interview was panned by many commentators at the time. “A crime against journalism,” The Intercept’s Mehdi Hasan (3/19/18) called it. “Embarrassing to watch,” insisted Omar H. Noureldin, VP of the the Muslim Public Affairs Council (Twitter, 3/20/18). “It was more of an Entertainment Tonight puff piece than a serious interview with journalistic standards.”

The New York Times editorial, while not quite as overtly sycophantic as Friedman and O’Donnell, still broadly painted the ruler as a “bold” and “brash” “reformer.”

Since the mass arrests of women’s group’s on Saturday, the Times news section has run several AP stories (5/18/18, 5/22/18) on the crackdown and one original report (5/18/18), but the typically scoldy editorial board hasn’t issued a condemnation of the arrests. They did, however, take time to condemn in maximalist terms the “violent regime” of Venezuela (5/21/18), insisting on “getting rid” of recently re-elected president Nicolas Maduro, and ran a separate editorial cartoon (5/22/18) showing Maduro declaring victory over the corpses of suffering Venezuelans. 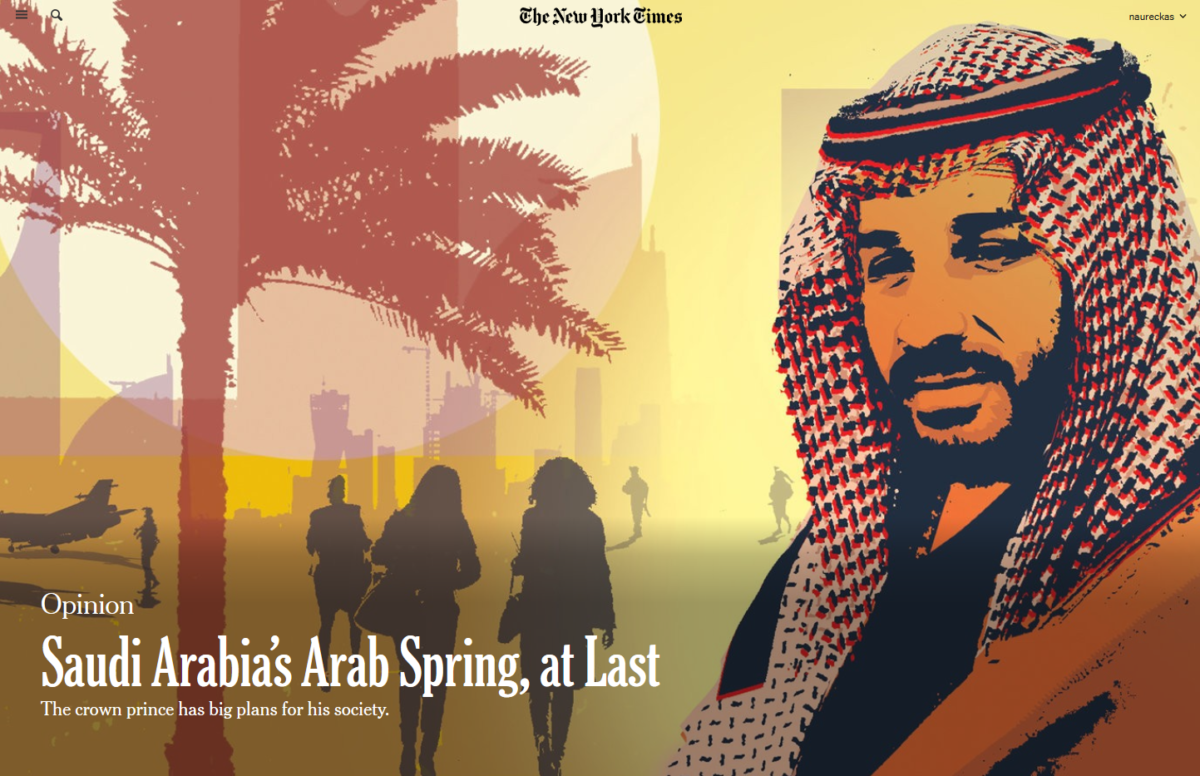 Thomas Friedman (New York Times, 11/23/17): “It blew my mind to learn…that Lebanese soprano Hiba Tawaji will be among the first woman singers to perform a women-only concert here.”

Nor did MBS’s biggest court stenographer, Thomas Friedman, find room in his latest column  in his latest column (5/22/18) to note the crackdown. Given Times opinion page editor James Bennet was clear his paper was axiomatically “pro-capitalism” (3/1/18), one wonders whether he views Latin American socialists as uniquely worthy of condemnation, whereas Middle East petrol dictatorships that invest in American corporations and hosts glossy tech conferences deserve nuance and mild “reform” childing. We have to “get rid of” the former, and the latter simply need “guidance” from the US—their respective human rights records a total non-factor.

CBS ran a  50-second story on the “emancipating” MBS’s crackdown on its web-only news network, CBSN (5/21/18), and an AP story on its website (5/19/18), but CBS News has thus far aired nothing on the flagrant human rights violation on any of the news programs on its actual network, and certainly nothing in the ballpark of its most-watched prime time program, 60 Minutes.

If influential outlets like the Times opinion section and CBS News are going to help build up bin Salman’s image as a “reformer” and a champion of women’s rights, don’t they have a unique obligation to inform their readers and viewers when the image they built up is so severely undermined? Shouldn’t Bennet’s editorial board and Friedman—who did so much to lend legitimacy to the Saudi ruler’s PR strategy—be particularly outraged when he does a 180 and starts arresting prominent women’s rights advocates? Will 60 Minutes do a comparable 27-minute segment detailing these arrests and their chilling effect on activism?

This is all unlikely, since US allies’ crackdown on dissent is never in urgent need of clear moral condemnation; it’s simply a hiccup on the never-ending road to “reform.”