Thanksgiving was not much fun for baby panda Bei Bei at the Smithsonian National Zoo in Washington, DC. He is now recovering from an emergency “lifesaving” surgery. Vets retrieved a lemon-sized mass of bamboo from his bowel.

The giant panda cub suddenly fell sick on Thursday, showing signs of stomach discomfort and nausea. He was rejecting food and slept more than normal. Following a day of anti-nausea medication and constant veterinary checks which went into the night, Bei Bei was transported to a hospital early Friday morning. 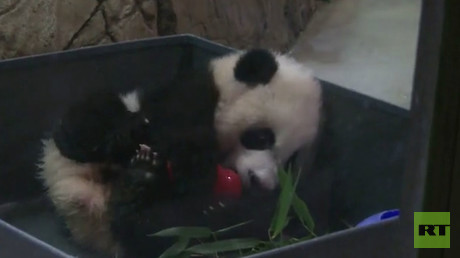 An ultrasound revealed the reason for Bei Bei’s malaise: a mass of bamboo blocked his bowel, preventing intestinal movement. It then became clear that he needed a “life-saving surgery” to remove piled up bamboo.

“Bei Bei is awake and recovering in the David M. Rubenstein Giant Panda Habitat,” the National Zoo said in a statement Friday.

The 15-month-old panda cub is now going to observe a strict diet before he can start eating bamboo again. He will be given water overnight and will then start on soft foods such as sweet potatoes, pears and ground up leaf-eater biscuits.

He will eventually be given bamboo, but at first it will likely be finely cut leaves.

“There is every expectation Bei Bei will return to his normal diet in the near future,” the zoo said.

To keep Bei Bei’s fans updated, the zoo is going to post updates on his recovery via social media.

Bei Bei made his first public appearance in January 2016, weighing a little over 22 pounds (10 kg).