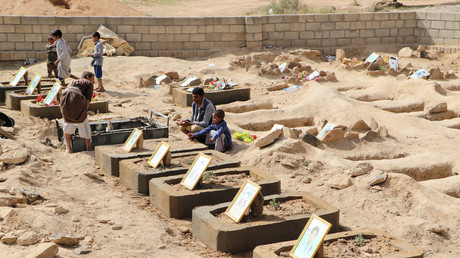 US Secretary of State Mike Pompeo has told Congress that the governments of Saudi Arabia and the United Arab Emirates are doing enough to protect civilians in their campaign in Yemen. The facts however, tell a different story.

Pompeo said in a certification statement Wednesday that ending the three-year conflict is a national security priority for President Donald Trump, and that the US will “continue to work closely with the Saudi-led coalition,” to end the war.

The certification is a requirement of the National Defense Authorization Act, an annual bill that sets out the US military’s vast budget and policies for the coming year. President Trump signed the 2019 NDAA into law in August.

Yemen’s civil war, ongoing since 2015, pits Iranian-backed Houthi rebels against the government of Abdrabbuh Mansour Hadi. Hadi is supported by a coalition of Arab and Gulf states, including Saudi Arabia and the United Arab Emirates, which is backed by US intelligence and logistical support.

Amid a mounting civilian death toll, Defense Secretary James Mattis said last month the US intended to continue backing the Saudi-led coalition regardless. He said Wednesday he agrees the Saudi and Emirati governments are making “every effort to reduce the risk of civilian casualties.”

In reality, a damning UN report has blamed all sides in the Yemen conflict of committing war crimes. Airstrikes by the Saudi-led coalition were found responsible for most of the documented civilian casualties, and UN investigators said that these strikes indiscriminately targeted “residential areas, markets, funerals, weddings, detention facilities, civilian boats and even medical facilities.”

A disturbing and graphic video shows shocked and blood-soaked children taken to hospital immediately after the attack.

Another “egregious” example was the March 15, 2016 strike on Jhamees market, which killed more than 100 civilians, 25 of whom were children. The UN estimates there have been 6,660 civilian deaths between March 2015 and August, but the true figure is believed to be higher.

The UN report found that these attacks raised “serious questions about the targeting process applied by the coalition.” Within the coalition itself, differing accounts of these strikes have surfaced. After the bus attack, one Saudi spokesman flat out denied that a school bus was hit, and said the bus was full of “Houthi commanders.” Meanwhile, an internal investigation concluded that “mistakes” were made when carrying out the strike, the closest thing to an apology the coalition has offered.

Emirati forces, which control southern Yemen directly, have been accused of arbitrarily detaining opponents, and subjecting them to torture and inhumane treatment. Prisoners in Emirati-controlled jails have been “beaten, electrocuted, suspended upside down, drowned, threatened with violence against their families and held in solitary confinement for prolonged periods in violation of the absolute prohibition on torture, cruel or inhuman treatment.”

In addition, all sides have been accused of rape and sexual violence, and using child soldiers.

While Pompeo pledged on Wednesday to ensure “unimpeded access for the delivery of commercial and humanitarian support,” America’s Saudi partners have not been as charitable. The Saudi-led blockade on Yemen has resulted in shortages of food, medicine, and clean water in what is already the Arab world’s poorest country.

Some 22 million Yemenis, including more than 11 million children, are in need of humanitarian assistance, in what the Norwegian Refugee Council last year called called a “man-made famine of Biblical proportions.”

While the United States does not fly bombing missions over Yemen, it is Saudi Arabia’s largest weapons supplier, and the US military has provided intelligence and logistical support for the Kingdom’s bombing campaign, and has reinforced the Saudi blockade. It was also recently revealed that the Pentagon plans to train Saudi military pilots on US soil.