The secretary of state has commenced a three-day tour designed to rally American allies in the Middle East, as new sanctions against Iran loom and the nuclear deal with Tehran hangs in the balance.

“We are urging nations around the world to sanction any individuals and entities associated with Iran’s missile program, and it has also been a big part of discussions with Europeans,” Brian Hook, a senior policy advisor on Pompeo’s team, told journalists shortly after landing in the Saudi capital of Riyadh on Saturday evening.

Hook also accused Iran of supplying the rocket that Riyadh said was launched by the Houthis from Yemen into Saudi Arabia on Saturday, which killed one man.

“Iran’s missiles prolong war and suffering in the Middle East, they threaten our security and economic interests and they especially threaten Saudi Arabia and Israel,” Hook said. Saudi Arabia’s bombing campaign against the Houthi insurgents in Yemen has been underway for just over three years. Almost 6,000 civilians are estimated to have been killed in the war, over half the Yemeni population has been left without enough food, and basic infrastructure has been largely reduced to rubble. 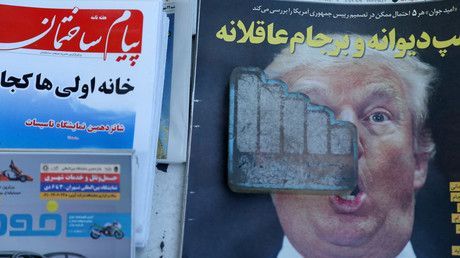 Meanwhile, Pompeo met with Saudi Foreign Minister Adel al-Jubeir and Crown Prince Mohammed bin Salman, though the content of their discussions was not publicly revealed.

The visit, which will next take the secretary of state to Israel and then Jordan, was put together on short notice and began just two days after the former CIA chief was confirmed by Congress in his new post.

A well-known hawk on Iran, he is expected to offer support to its biggest regional adversaries at what may become the next international flashpoint in the coming weeks. US President Donald Trump has threatened he will not recertify the 2015 nuclear control agreement with Iran on May 12, which he has described as “the worst ever,” unless European signatories, including the UK, Germany and France “fix” its “serious flaws.” Tehran has already said that any alterations to the agreement, which eased sanctions in exchange for restrictions on the country’s nuclear program, are “unacceptable.”

“There’s been no decision, so the team is working and I am sure we will have lots of conversations to deliver what the president has made clear,” Pompeo told the media on Friday in Brussels.

As well as delivering diplomatic gains, Pompeo has promised to return “swagger” to the US State Department, which he admitted was “demoralized” in recent months due to the internal divisions regarding White House foreign policy and the management of Rex Tillerson, who was occasionally ignored and belittled by Trump before resigning late last year.