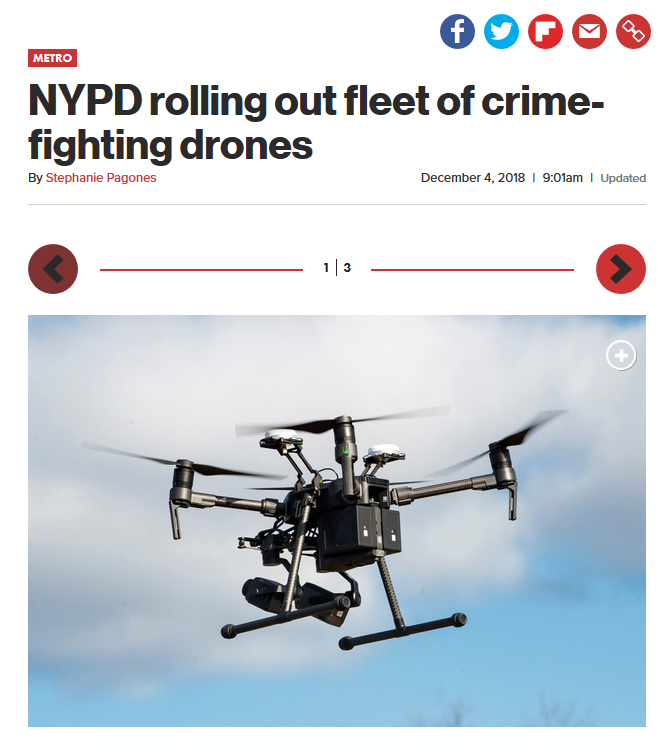 The New York Post (12/4/18)assures us that cops promise not to use drones for “unlawful surveillance.”

Police drones are expanding, but are the media asking questions?

The NYPD, the nation’s largest police force, announced this week that they had purchased over a dozen flying robots to fly over Gotham, while promising that the new technology wouldn’t be used for any of the illegal spying shenanigans the police department has been caught up in time and time again. The announcement, however, was awkwardly timed, as the police department had already purchased drones—last December.

Instead of asking the kinds of questions one might expect for a scandal-plagued agency obtaining expansive new surveillance powers—Why did you wait a year to announce the move? Was the public consulted? Are there oversight mechanisms to guard against misuse?—most media outlets questioned nothing, quoted generously from police officials and (at best) sprinkled in few concerns from legal organizations.

ABC 7 News (12/5/18) broadcast live coverage of the NYPD press conference, where its viewers were given front-row seats to police officials providing live demos of the drones, including their thermo-imaging video capabilities. While the scene was eerily reminiscent of parts of Paul Verhoeven’s classic 1987 dystopian satire Robocop, media coverage was more casual than spectacular, as it appeared to try to allay the concerns of the public.

NY1 News (12/4/18) led its coverage of the announcement by describing the ways that drones could be helpful after an accident:

When there’s a major car crash, seconds matter. NYPD highway investigators often race against the clock to reconstruct what happened and to let traffic move again. That includes taking pictures of the entire scene, a time-consuming task, but one made much easier by a drone.

Newsday (12/4/18) reported that NYPD drones would help in “emergency operations,” not “warrantless searches”—according to police.  Fox 5 News (12/4/18) also listed out the various (beneficial) uses of drones—again, according to police. Newsday and Fox at least included reporting on some of the criticism from civil liberties groups. The conservative tabloid New York Post didn’t even bother to report on anything outside of the police talking points in its coverage (“NYPD Rolling Out Fleet of Crime-Fighting Drones,” 12/4/18). Ditto for CBS 2 News (12/4/18), which echoed the police’s case for drones.

While police methods continue to be shrouded in secrecy (FAIR.org, 6/21/17), one would think that the media could and should play a role in keeping them accountable. Competent journalism might begin with asking tough questions. It could mean filing Freedom of Information requests. A dedicated reporter rifles through trash to find answers. But why isn’t there any of that around an issue as dangerous and consequential as police robots? Perhaps media don’t want to know any potential ugly truths here. It seems that they’re content to leave the tough questions to TMZ reporters.

Media’s propensity to serve as stenographers and lapdogs for law enforcement is nothing new (Alternet, 2/25/16). But the coverage of the NYPD’s drone roll-out is particularly egregious, because of how the move in the Big Apple could significantly impact surveillance and civil liberties nationwide. While New York City isn’t the first American city to fly cop robots, its participation in the drone era will likely have a multiplier effect on smaller departments across the country, which often take their cues from NYC, the nation’s most visible policing platform.

If media coverage continues to be this toothless, it’ll become increasingly easier for cops everywhere to take over the skies above all of us.