Even with a looming Brexit disaster and rumours of a Conservative Party coup, UK Prime Minister Theresa May still found time in Parliament to condemn RT and use it in her own propaganda effort against political opponents.

May was responding to Scottish Conservative MP John Lamont during Prime Minister’s Question Time, who asked whether she considered it inappropriate for current and former MPs to appear on RT.

“I am sure we all have doubts about the objectivity of the reporting on Russia Today, which does remain a tool of propaganda for the Russian state,” May replied.

The question in itself was clearly a veiled attack on political figures who chose to appear on RT.

May, who will only take questions like this from her own MPs if she wants to answer them, went on to say: “Now the decision about appearing on Russia Today is a matter of judgement for each individual, but they should be clear that they risk being used as propaganda tools by the Russian state.”

She went on to refer to previous comments made by Ian Blackford MP, the most senior Scottish National Party in Parliament, who said no politician should appear on RT. He was responding to a question about former SNP leader Alex Salmond’s show on the station. 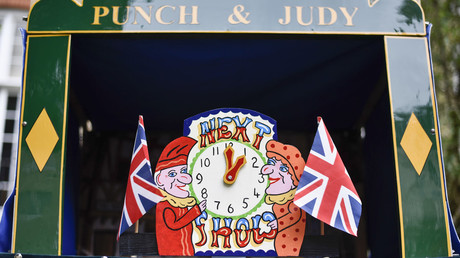 In this instance, May was in full support of Blackford, even though minutes earlier he had called her unfit to govern. The campaign against RT is proving a useful rallying point even for the warring factions of Parliament.

Responding to the labeling of RT and its guests as tools of Russian propaganda, its Editor-in-Chief Margarita Simonyan tweeted: “This is Theresa May speaking in Parliament, where members of her own party are openly planning her resignation. Threatened by sacking, poisoning and flatulence? Blame RT for all of it.”

Salmond whose show is made by his own production company Slainte Media and then screened on RT International responded to the PM’s comments.

He said: “It is plain daft to offer a comment on a show she has never even seen. The Prime Minister should take some time tomorrow to watch the Alex Salmond Show which is the third in a series on Britain’s railways and specifically on how the building of HS2 is impacting on London communities. She will then be able to judge if she can detect any pro-Russian propaganda from the residents of Camden!”

Before the poisoning of the Skripals in Salisbury earlier this year, MPs from most parties in Parliament appeared on RT, happy that they were allowed to freely express opinions on any subject. Since then RT has been a central target for the anti-Russia sentiment which has been clearly evident in Parliament.

As far back as October 2017, Boris Johnson, the then Foreign Secretary, famously berated Labour MPs, who came on RT. Other Tory MPs were regulars on the channel, and embarrassingly for Johnson, he was speaking shortly after his own father Stanley Johnson appeared on RT’s Going Underground to promote his anti-Brexit book, Kompromat, and discussed whether any of the characters were based on his son.