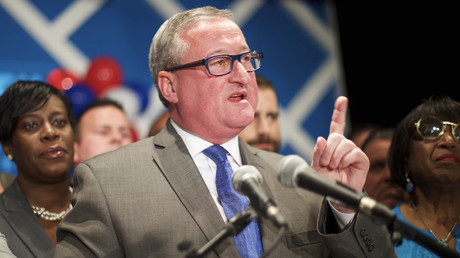 Philadelphia Mayor Jim Kenney has caused a Twitter storm for directing a blistering attack at US President Donald Trump after the White House called off a ceremony to honor Super Bowl champions the Philadelphia Eagles.

Lashing out at the president, Kenney, called Trump a “fragile egomaniac,” who is “not a true patriot” and is “obsessed with crowd size.” Kenney, a Democrat, said Trump was “afraid of the embarrassment of throwing a party to which no one wants to attend.”

To add insult to injury, Kenney then went on CNN and told host Don Lemon that “there’s no one more disrespectful to this country than the president of the United States, which is a sad thing to say, but it’s true,” and he claimed that every day of the Trump administration was a “new adventure in dysfunction.”

The drama followed Trump’s abrupt decision to call off the White House ceremony on Tuesday, after a number of Philadelphia players tried to back out of the event due to Trump’s repeated criticisms of NFL players who refused to stand for the national anthem.

Unsurprisingly, Kenney’s comments set off a firestorm of both criticism and support on Twitter. Some defended the president, suggesting it is not up to the mayor of Philadelphia to decide what a patriot looks like, and criticized players who refuse to stand for the anthem.

Others lauded Kennedy and his “rightful” questioning of the president’s patriotism.

Not really a football fan, but I’m now a fan of Philadelphia Mayor Jim Kenney after he calls Trump a “scary guy” and rightful questions his patriotism. Good for him. Go, Eagles.

I’m with Philadelphia Mayor Jim Kenney. Calling President Cray Cray a patriot is like saying cigarettes are a cure for cancer. #TuesdayThoughts#MorningJoe

Mayor Kenney is totally correct and it’s about time someone start calling @realdonaldtrump unpatriotic and a lot worse. He is a #traitor to America and so proud of our #Eagles. “Philadelphia Mayor Jim Kenney”

Kenney’s chief of staff, Jane Slusser, mocked Trump by posting side-by-side images that appeared to show there was a larger crowd at the celebrations for the Eagles’ Super Bowl win than at Trump’s inauguration — a topic which the president has been sensitive about in the past.

White House press secretary Sarah Huckabee Sanders accused the Eagles of engaging in a “political stunt” by first committing to bringing more than 80 team members to the White House, then trying to back out or reschedule the celebration for the date of Trump’s summit with North Korean leader Kim Jong-un in Singapore.

“The Eagles are the ones that tried to change their commitment at the eleventh hour, and the president thinks the fans deserve better,” Huckabee Sanders told the White House press corps.

In place of the ceremony, Trump decided to hold a ‘Celebration of America’ with the US Marine Corps band and the Army Chorus on Tuesday afternoon, tweeting that he would “proudly be playing the National Anthem.”

We will proudly be playing the National Anthem and other wonderful music celebrating our Country today at 3 P.M., The White House, with the United States Marine Band and the United States Army Chorus. Honoring America! NFL, no escaping to Locker Rooms!