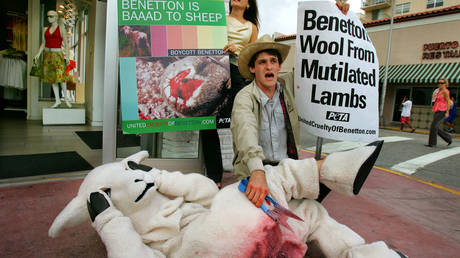 Activists at People for the Ethical Treatment of Animals (PETA) saw the crook as a betrayal of Pixar’s attempt to give the character a tough “modern” update, claiming that the sheep-herding instrument she carries is “still problematic.” “A badass Bo Peep would likely bop the shearers, not the sheep,” according to PETA’s Lauren Thomasson.

Their problem is apparently not that they think the crook itself is a cruel instrument, but the fact that it “promotes exploiting gentle sheep for their wool.”

While it is doubtful that most kids will even know what the old-timey shepherd’s tool is in the first place, the world’s largest animal rights organization decided that the issue is so serious it merits the film being reanimated from start to finish, to censor the offending instrument.

“We know that kind people everywhere would sing your praises – and Bo Peep’s, too – with this change,” PETA’s letter said.

Those exposed to the ads across social media had reactions that ranged from laughter to annoyance and even pity for those pushing the ill-considered media campaign.

One person pointed out that in the image PETA used for the ad, Bo Peep is standing next to the film’s main character who is literally wearing a leather hat and a cowhide vest:
“Really?… :face_with_rolling_eyes: Woody is wearing a Cow vest and you are not all over him, are you?… Anyway this is too much PETA…“

Others questioned PETA’s understanding of how and why shepherds actually shear wool.

PETA, you do know that domesticated sheep don’t shed their wool naturally and can have horrible health problems if not sheared, right?

Okay. I vow to never wear anything with wool that was harvested from CGI sheep. Your welcome.

While most people disagreed that the film promoted animal cruelty at all, many of PETA’s supporters felt that the group’s descent into absurdity was fairly cruel toward them: “PETA gave me a purpose back in my life and I will forever love you, but this is just ridiculous. I stand up for the PETA name everyday against ridiculous people who mock it, but this makes it even harder. Like I can’t even argue.”

While the group’s choice of a target may same odd, PETA has shown us time and time again not to underestimate their penchant for the inexplicable. In a puzzling attempt to contribute to the debate around “toxic masculinity” sparked by a Gillette ad last month, PETA released their own ad which featured men with vegetables in place of their genitalia.