The B61-12 gravity bomb engineering lab has released a detailed video report from non-nuclear system qualification flight tests of the future American nuclear deterrent, carried out at a restricted range in the Nevada desert.

The five-minute video by Sandia National Laboratories shows the entire preparation process and the actual drop of inert B61-3/4 tactical nuclear bombs at the Tonopah Test Range in Nevada back in July 2017.

The slow motion parts of the video center around two F-15E jets deploying spin-stabilization rockets to drop B61-12 test units. Seconds later parachutes are seen opening to bring a GPS-guided dud to the ground. Tests that were monitored and assessed using the live unit tracking were conducted at both low and high altitudes.

Sandia, which is responsible for the production of custom electronics, including neutron generators, was not shy about showing their equipment and offering a glimpse into the testing facility and instruments used to collect telemetry in the testing of projectiles, aircraft and fire control systems. 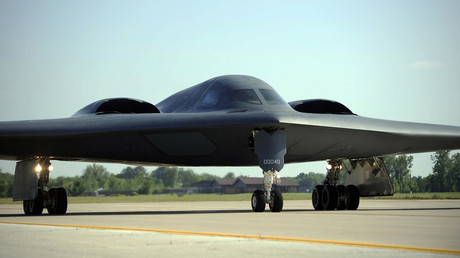 The video concludes with images of the blanks being recovered by a team of scientists who are also shown conducting tests on the ground.

Different versions of the B-61 nuclear gravity bomb have been deployed across the US and NATO bases for five decades. While, over the years, the Pentagon produced numerous modifications to the deadly weapon, B61 variants 3, 4, 7, and 11 remain in service. The B61’s yield ranges from 0.3 to 50 kilotons. The first of the two nuclear bombs ever used, against the Japanese city of Hiroshima, had a 15-kiloton yield.

The drop tests were conducted as part of the costly $7.6 billion ‘B61-12 Life Extension Program’, which aims to “refurbish, reuse, or replace all of the bomb’s nuclear and non‐nuclear components” and extend the service life of the B61 by at least 20 years. The “first production unit” is scheduled for completion in 2020.