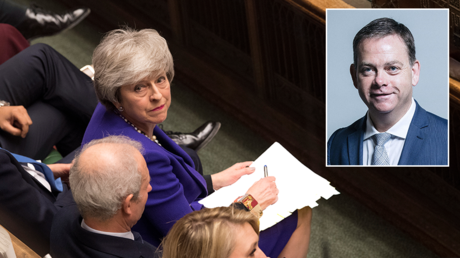 Nigel Adams, who has resigned from Theresa May’s cabinet as a junior Welsh minister, injected some joviality into the house of commons – ostensibly trolling PMQs and underscoring his question with a series of dramatic pauses.

Adams quit May’s government earlier on Wednesday in disgust at the PM’s proposal to broker a Brexit deal with the help of Labour leader Jeremy Corbyn.


After a rather unremarkable exchange between May and Corbyn at the dispatch box, the former cabinet member rose to his feet. An array of excitable Tory Brexiteers stamped their feet in anticipation to what Brexit-related bombshell he might drop, to the embarrassment of the PM.

British lawmakers were then treated to a performance dripped in comedy and straight out of the trolling playbook, as Adams delayed this delivery with a string of long pauses, much to the glee of MPs across the House.

While parliamentarians laughed at the contrived theater the ex-minister had managed to create, a visible sign of relief could be seen on the Tory government benches, led by May.

Adams finished his question by insisting that he was “sorry to disappoint colleagues…but this is very important for the people of Selby.”

Adams, one of the prime minister’s junior ministers for Wales, announced his resignation on Twitter, claiming that May’s shift to a softer Brexit was a “grave error.”


In his letter to May, he accused the PM of “legitimizing” the Labour leader by pleading for his help to secure a Brexit agreement that the majority of MPs can support. Adams argues that a customs union is now inevitable, which is “not the Brexit my constituents were promised.”