Israel claimed that it intercepted an Iranian drone in Israeli airspace on Saturday, February 10; Iran denied that it had a drone there. Israel then bombed a Syrian airbase, saying it was the command-and-control center from which Iran had launched the drone. The Syrian government shot down an Israeli jet that had bombed the base, and Israel subsequently launched more airstrikes against Syria.

Reuters (2/13/18) described the latter airstrikes as Israel having “retaliated” for the downing of its aircraft. Vice (2/13/18) too characterized them as “retaliatory”; the Los Angeles Times (2/11/18) did the same three times. These word choices wrongly imply that Israel was acting defensively, when it was Israel who fired the first shots in the weekend’s exchanges: These outlets were saying that Israel was “retaliating” against Syria for defending itself against an ongoing Israeli attack.

“Retaliation” is an exculpatory term. To say that a party is “retaliating” is to say that their actions are an understandable response to another party’s provocation. As FAIR’s Rachel Coen and Peter Hart (Extra!, 5–6/02) wrote more than a decade and a half ago, the term “lays responsibility for the cycle of violence at the doorstep of the party being ‘retaliated’ against, since they presumably initiated the conflict.” In this case, casting Syria and Iran as the aggressors rests on the dubious assumption that flying a drone over Israel—if Israel’s charge is accurate—is more aggressive than Israel dropping bombs on Syria. 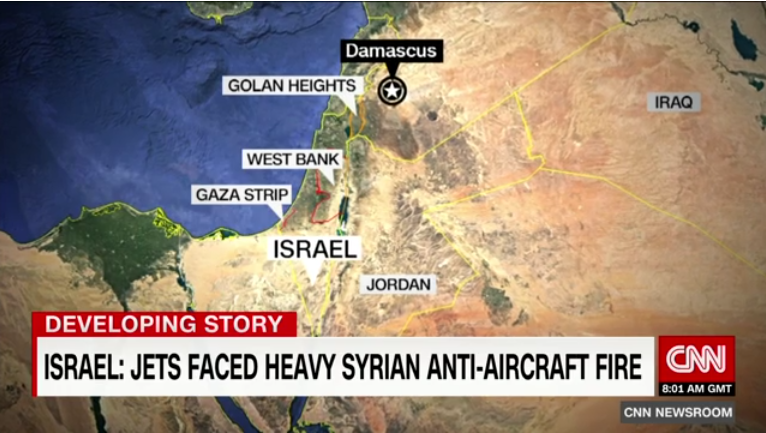 Painting warplanes carrying out an aggressive bombing raid as victims.

It also rests on the flawed assumption that the timeline of hostilities between Israel and the Syrian government began on Friday, February 9. However, despite the Associated Press’s untenable claim (2/10/18) that “Israel has mostly stayed out of the prolonged fighting in Syria,” Israel admits to having bombed the Syrian government and its ally Hezbollah nearly 100 times since the war in Syria began in 2011 (Reuters, 2/6/18). If Brigadier General Amnon Ein Dar, the head of the Israeli Air Force’s Air Division, is to be believed (Ynet, 2/11/18), the Israeli military has “carried out thousands of missions in Syria in the last year alone.”

A Washington Post article (2/10/18) made the similarly dubious assertion that “Israel has largely stood on the sidelines of the Syrian conflict over the past seven years.” In the next paragraph, though, the author acknowledges that “Israel has conducted dozens of covert airstrikes against [the Syrian government-aligned] Hezbollah weapons convoys in Syria,” and the piece goes on, in a spectacular display of self-contradiction, to note that “Israel has carried out a number of significant attacks in Syria in recent months.”

Israel has also supported the Syrian armed opposition for years, the Wall Street Journal (6/18/17) reported, supplying fighters with food, fuel, medical supplies “and money payments to commanders that help pay salaries of fighters and buy ammunition and weapons.” According to the Journal, the Israeli army “is in regular communication with rebel groups,” and Israel “has established a military unit that oversees the support in Syria—a country that it has been in a state of war with for decades—and set aside a specific budget for the aid, said one person familiar with Israeli operation.” There is even reason to believe that Israel has had an alliance with the Al Qaeda affiliate in Syria (Middle East Monitor, 5/26/15; Electronic Intifada, 6/16/15). None of the articles cited here on the February 10 clashes mentioned this important backdrop.

Turning an Occupation Into a ‘Border’ 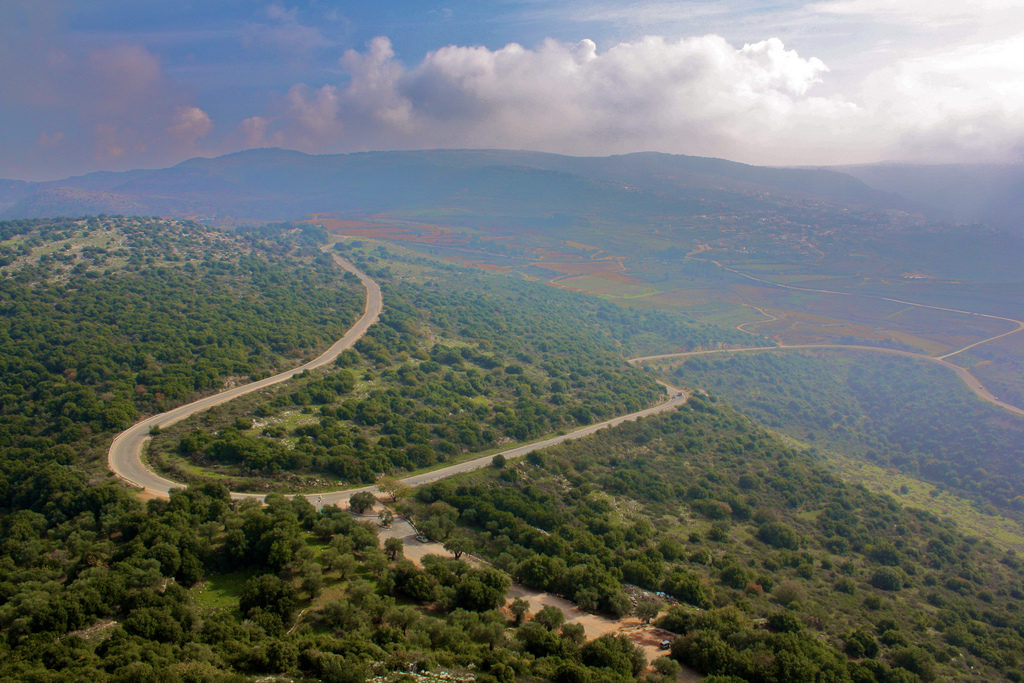 Coverage of these events also failed to correctly describe the status of the Golan Heights, a piece of land that is central to the Israeli/Syrian conflict. Israel occupied the territory in the 1967 war, fought off a Syrian effort to reclaim it in 1973, and illegally annexed it in 1981. Israel has sought to take advantage of the war that has devastated Syria for nearly seven years by, as Matt Broomfield writes in the Electronic Intifada (11/11/16), planning a fivefold increase in the number of Israeli settlers in the Golan, allocating $108 million for 750 new Israeli agricultural projects in the territory, and significantly expanding military forces along the boundary between Syria and the area under Israeli control.

The New York Times (2/10/18) made two references to “the Israeli-held portion of the Golan Heights,”  a rather anodyne depiction of territory that is internationally recognized as Syrian, but which Israel seized by force of arms and claimed for itself.

The Washington Post (2/10/18) said that “Israel shares a contentious border with Syria—the Golan Heights.” But the Golan isn’t “a contentious border”; it’s a territory that, despite Israeli claims to the contrary, unambiguously belongs to Syria under international law.

A CNN report (2/11/18) closed by saying that “authorities also accused Syria in November of violating the 1974 ceasefire agreement [with Israel] by “conducting construction work” in the northern part of the Golan Demilitarized Zone.” While it’s unclear which authorities are being referenced, this passage neglects to mention that by late 2015, Israel had built 30 settlements, housing 20,000 settlers, in the Golan, or that a year later it announced plans for 1,600 new homes in the territory, “construction work” that has been roundly condemned by “authorities” like the United Nations.

Moreover, 20,000 Syrians live in the Golan, and many are directly harmed by Israeli policies. According to the United Nations Human Rights Council (UNHRC), Israel’s discriminatory land, housing and development policies in the territory have made it hard for Syrians to get building permits, leading to increasingly overcrowded Syrian towns and villages. The UNHRC also points out that Israel has demolished a Syrian home, and that a number of Syrian homeowners have reportedly received demolition notices.

This larger context of Israel’s Syria policies would have helped news readers make sense of what occurred on February 10, but it was absent. Given that Israel had just launched an airstrike on a Syrian base, has apparently bombed Syria close to 100 times in the past six years, has carried out perhaps 1,000 attacks against it in the last year, has backed an armed insurgency against the Syrian government, and has stolen and illegally colonized Syrian land while oppressing and dispossessing Syrian civilians, it is far more accurate to say that Syria retaliated against Israel on February 10.