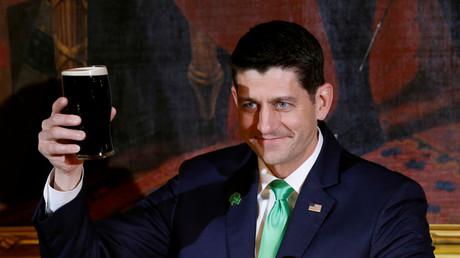 Outgoing Republican House speaker Paul Ryan is being accused of hypocrisy and nepotism, for championing Donald Trump’s hardline immigration policies yet pushing to loosen visa requirements for migrants from his family’s homeland.

As one of his last acts as leader of the House of Representatives, Ryan managed to squeeze through a bill on November 28, introducing immigration privileges for the Irish. If passed, the legislation would allow them to be granted the E-3 specialty occupation working visa, which only citizens of Australia are eligible for. Dublin is expected to reciprocate with similar measures, as well as easing restrictions for US citizens wishing to retire in Ireland.


Ryan, whose ancestors fled Ireland in the middle of the 19th century, and who earlier this year noted that he would like to become the US ambassador to Dublin, has faced a barrage of criticism for this selective immigration policy approach.

The 48-year-old Wisconsin native has been accused of nepotism and supporting ‘white’ immigration only, while not doing enough to defend the refugees from other nations, in particular Central Americans who are facing a mounting crisis at the US’s southern border. Social justice podcast ‘Irish Stand’ even called Ryan’s actions an “insult” to his own heritage.

You’ve insulted your Irish heritage a thousand times by supporting Trump @SpeakerRyan.
The 7 year old who died of dehydration mirrors the Irish famine children who died in coffin ships.
End your career in silence, not with a pathetic pandering to the heritage you’ve disgraced. https://t.co/VsT6wSlYJl

“Pushing white #Irish immigrants through, while detaining hundreds of people at America’s border with Mexico? The hypocrisy of this administration is shameful,” another tweet reads.

Pushing white #Irish immigrants through, while detaining hundreds of people at America’s border with Mexico? The hypocrisy of this administration is shameful. ⁦@irishstand⁩

Paul Ryan’s bill to give more visas to Irish ppl passed the house & is up for a vote in the Senate next week.

Why hasn’t there been a push on here to call those same Reps who voted yes on this bill to also bring the Dream Act up for a vote and then to YES on it?

#hr392 has 330 cosponsorship but speaker Ryan didnt bring that bill for debate. This is such a nepotism for Irish people where Indians and Chinese have to wait decades for green card where white europeans get green cards in months.

Paul Ryan’s pet Irish Visa Bill is Dumb; A clear example of the fact that the race & ethnicity of the people that make the rules affects who the rules benefit. Until our democracy represents our demographics, it is a democracy in name only.

Ryan got a portion of criticism from conservatives alike, with some expressing concerns that the “cheap” young immigrant labor would slash the salaries of American graduates.