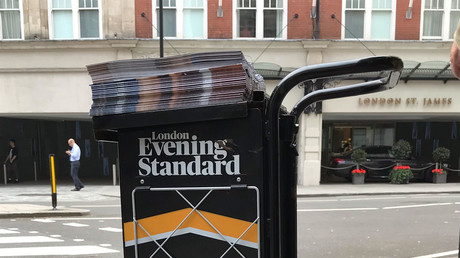 The Evening Standard newspaper has been accused of a “disastrous” mixing of advertising and editorial content amid allegations it agreed to provide “favourable” coverage to companies in exchange for sponsorship of campaigns.

The paper, currently led by former Tory Chancellor George Osborne, came under fire on Thursday after website Open Democracy reported it offered “money-can’t-buy” news coverage to companies, including Google and Uber, as part of a £3 million deal. It offered positive editorial content in exchange for sponsorship of campaigns on issues including climate change and housing.

Peter Oborne, assistant editor at The Spectator, called into question the paper’s editorial standards as he told RT: “At the very least this shows a disastrous mixing up of editorial and advertising.

“It is very important that news reporting is honest and is clear,” he told RT’s Polly Boiko.

“What I am concerned about here is the mixing up of commercial interests, advertising and straight news reporting and it’s very important that the person who reads the newspaper can be sure that what is happening here is honest news.

“Now judging by the stuff that is being produced by Open Democracy, there is a disastrous muddle at the very least going on at the Evening Standard.”

A spokesperson for the Evening Standard’s parent company said the claims are “grossly inaccurate,” a “wildly misunderstood interpretation,” and that advertising would “always be appropriately flagged up.”