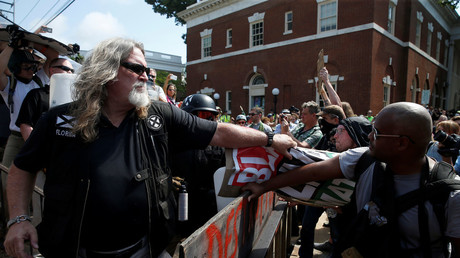 The US President has spoken out against racism and violence ahead of a fresh Unite the Right rally on Sunday, and has trumpeted his own achievements that he says have benefitted African-Americans and Hispanics.

“The riots in Charlottesville a year ago resulted in senseless death and division. We must come together as a nation. I condemn all types of racism and acts of violence. Peace to ALL Americans!” Donald Trump tweeted on Saturday afternoon.

The statement Trump made one year ago, in which he blamed “hatred, bigotry, and violence on many sides” in the aftermath of the clashes between white nationalists and counter-protesters, was one of the most controversial moments of his presidency. While he gathered some support from his base, who believed that Antifa helped ignite the combustible atmosphere, Trump was widely condemned even by members of his own party, who pointed to the death of Heather Heyer, who was killed when a Unite the Right demonstrator plowed his car into a crowd of counter-protesters.

The riots in Charlottesville a year ago resulted in senseless death and division. We must come together as a nation. I condemn all types of racism and acts of violence. Peace to ALL Americans!

Saturday’s tweet took a more diplomatic, positive and inclusive tone but, notably, did not contradict anything the US president said a year ago, something ignored in most media outlets, which commended his conciliatory tone, but noted by his political opponents.

Trump didn’t “call for peace,” @USATODAY. He used coded language—“all types of racism”—to signal his fellow white supremacists to feel as aggrieved as those whom they terrorize and kill. He sought to dilute the meaning of a word. Please do not do the same. https://t.co/iADeDLR3kO

Trump also painted himself as an ally of minorities in a follow-up missive.

“I am proud to have fought for and secured the LOWEST African American and Hispanic unemployment rates in history. Now I’m pushing for prison reform to give people who have paid their debt to society a second chance. I will never stop fighting for ALL Americans!” he tweeted, once again presenting himself as a unifier.

The president’s diplomatic skills are sure to be tested on Sunday, when Unite the Right, a broad group uniting white supremacists, Confederate sympathizers, and more mainstream conservatives, gather for a second rally.

Charlottesville rejected Unite the Right’s request to stage the repeat rally, so the march has been relocated to Washington, DC, where police have promised a heavy presence that will separate the demonstrators from the likely much-larger counter-protester gathering. Meanwhile, Charlottesville itself held a commemorative demonstration, organized by progressives, on Saturday.