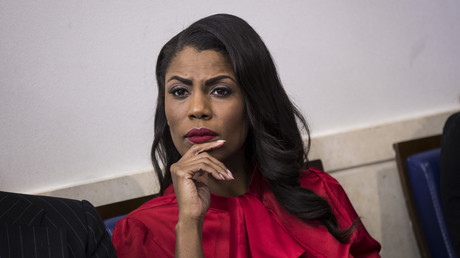 Former White House aide Omarosa Onee Manigault-Newman has unleashed a collective freak-out on Twitter after she revealed she recorded a conversation with chief of staff John Kelly from inside the White House Situation Room.

Omarosa made the shock reveal on Meet the Press WHAT CHANNEL on Sunday, where a clip of the covert recording was played. It features Kelly telling Omarosa her departure from the White House could be a friendly one.

It’s nothing short of stunning that an employee was able to sneak a smartphone into the Situation Room — the SCIF of all SCIFs – and surreptitiously record a conversation. #MeetThePress

Last month I described President Trump as “the worst security risk in US history.” If staff are carrying recording devices into the Situation Room, that epithet applies to his entire White House https://t.co/9CwyF9bc39

Many on social media were aghast at the thought of someone being able to record in the secure Situation Room.

If Omarosa carried for example a cellphone into the Situation Room, then not only did she record conversations there, but so potentially has any country or criminal organization that thought to hack her phone

The Situation Room is a secure conference room located in the basement of the White House, where people are required to leave their electronic devices outside before entering. It is run by the National Security Council and contains secure communications equipment which the president uses to communicate with the military and receive intelligence. Sensitive phone calls with world leaders also take place inside.

The room has sensors to detect cellular signals and bugs. There is a lead-lined box for communications devices at the reception area.

The fact that Omarosa recorded Trump/Kelly isn’t what bothers me. It’s the fact that she was able to bring a recording device into the White House situation room without ANYONE KNOWING. This entire administration is a perpetual threat to our national security.

I worked in the @WhiteHouse for 4 years. I went to countless Situation Room meetings. I don’t remember a single meeting that had a cell phone in it. There are specific places to drop electronics, for a reason. Bringing electronics into a secure space means it is no longer secure.

The revelation sparked fears that others may have been able to record sensitive conversations inside the room, with the Russia scare popping up in the conversation.

If Omarosa can sneak a tape recorder into the Situation Room then imagine what the Russians snuck into the Oval Office when Trump invited them in the day after he fired Comey. The place is probably bugged and Putin is probably listening to everything.

I’ve said that from day one. The whole purpose of trump letting Putin’s top Russian diplomats into our oval office secretly without our American press was to bug our oval office!!!

If it weren’t for the Russian media & their photos we would have never seen or heard that treason!