Watching old movies is a journey back through time, revisiting the social attitudes of our past.  A lot has changed during the last six or seven decades, much of it for the better. Thank goodness I don’t have to wear a white shirt and necktie just to go downtown nowadays, but back in the 1950s that was the norm, the required male attire. I remember my father somewhat awkwardly putting on his dress-up clothes, struggling with his necktie. Being a former fisherman, Dad was skilled at tying all sorts of complicated knots, but that necktie was one he never quite mastered.

The differences between then and now are many, among the most significant being the gender roles.  Male dominance was the accepted norm; this comes out in most movies of the era, in some more intensely than others.  One that really lays it out thick and heavy is Fritz Lang’s 1952 film Clash by Night, produced nearly two decades before the feminist revolution of the late 1960s. 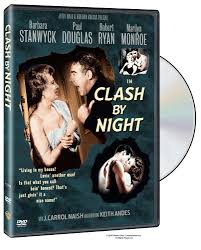 Clash by Night was filmed on location in Monterey and opens with picturesque shots of the seacoast, the fishing fleet, and Cannery Row, back then the center of a thriving fishing industry. The characters in this movie are fishing folk, the story centering on a love triangle in which Barbara Stanwyck plays a woman having an affair with her husband’s best friend. The lover, played by Robert Ryan, is an angry, cynical fellow, the kind of guy who’d seduce his best friend’s wife. The husband, Paul Douglas, is just the…