US State Department spokeswoman Heather Nauert’s refusal to take questions from Russian TV raised eyebrows, even among US journalists, who took to their Russian colleagues’ defense after Nauert implied they are Kremlin agents.

Nauert went on an ill-mannered tirade against the Russian media when she responded to a question from Rossya 1 TV journalist Aleksandr Khristenko during a policy briefing on Thursday. Khristenko asked about the prospects of the US and Russia cooperating on nuclear non-proliferation in light of Russian President Vladimir Putin’s remarks during the state-of-the-nation address on Thursday.

In the address, Putin unveiled the newest additions to Russia’s nuclear deterrents, including the next-generation Sarmat ICBM that is capable of attacking across the South and North Pole as well as the yet-unnamed nuclear cruise missiles. The speech incorporated videos, which showed missile test launches and a simulation of their trajectory to demonstrate the nearly unlimited range of the ICBMs. The videos did not show the moment of impact or presumable targets of a nuclear-powered strike. 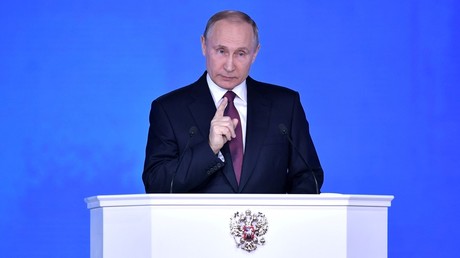 Nauert had no doubts that the simulation was an attack on America. “It’s certainly concerning to see your government, your country, to put together that kind of video that shows the Russian government attacking the United States, that’s certainly a concern of us, and I don’t think that it’s very constructive, nor it’s responsible,” she said, answering Khristenko.

Then, another journalist from Russia’s Channel One pointed out that the two missiles shown in the simulation videos were actually sent in different directions and nothing suggests they were aimed at the US.

Nauert asked the journalist where she was from. Upon hearing the answer, the diplomat exclaimed:

Her answer prompted a journalist from CNN, who was otherwise an unlikely defender of the Russian media, to break in: “I’m sorry. But what does that mean? There are not officials of the Russian government, they are just asking a question about Russia.”

This caused Nauert to jump to her favorite Russia narrative of bashing Russian media as “the long arm” of the Kremlin.

“Oh really? OK! We know that RT and other Russian news – so-called news – organizations are funded and directed by the Russian government,” she said to a briefing room buzzing with bemused journalists. 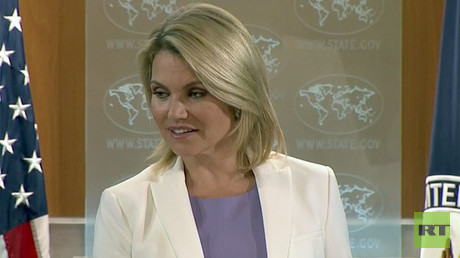 Matt Lee, a veteran reporter from AP, again pointed out the obvious, telling Nauert that the “video does not actually show missiles hitting anything,” and asked her if it was the “assessment of the US government” that the presumed target was the United States.

Lee, who was previously called out by Nauert for “working for RT” when he asked a similarly innocuous question about the searches in the Russian consulate in the US, did not elicit a response either. Nauert suggested that everyone interested can watch the video once again.

“It certainly looks like that. I ask you go back and take look at that. It’s pretty clear what their target is. OK? Let’s move on from this.”

It is certainly not the first time Nauert has launched an attack on the Russian media in response to tricky questions. She dubbed RT correspondent Sameera Khan “a representative of the Russian government” at a briefing in December when Khan asked if the State Department still believes that RT’s work in the US would not be hindered by its registration under the Foreign Agents Registration Act (FARA) after RT America was stripped of its Congress credentials. While Nauert assured RT that it would not happen back in October, she used air quotes to speak derisively about the “Russian news.”