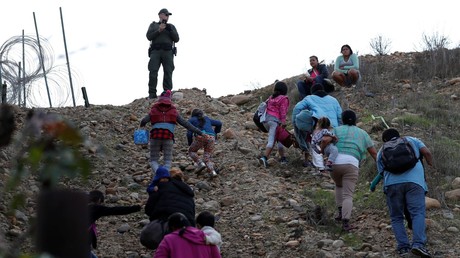 The death of a 7-year-old Guatemalan girl in US border patrol custody has triggered discussions. While some blame migration officials, others slam her parents who took her on a dangerous journey.

The girl was travelling with her father within a group of over 100 people; they turned themselves over to migration authorities near Lordsburg, New Mexico on December 6. Early December 7, after spending some eight hours in custody, the child started having seizures and was flown to the hospital. Her body temperature jumped to about 41 °C.

The girl went into cardiac arrest. She didn’t recover and died “less than 24 hours after being transported,” according to the Washington Post. Dehydration, septic shock and fever were said to be the likely cause of her death.


CBP insisted that the girl “reportedly had not eaten or consumed water for several days.” The agency, however, typically provides food and water to migrants in its centers. CBP’s spokesman Andrew Meehan said that the agents “took every possible step” to save the child’s life “under the most trying of circumstances.”

The case has sparked heated debate, with American Civil Liberties Union slamming the migration services for a “lack of accountability and a culture of cruelty.” It also criticized US President Donald Trump and his administration for toughening immigration policies.

Congressman Joaquin Castro said he would be asking for a full investigation into the case. “This is a humanitarian crisis and we have a moral obligation to ensure these vulnerable families can safely seek asylum, which is legal under immigration and international law at our borders,” he added.

Any decent person would provide drink, food and shelter the moment they pick up someone from the desert.
They would also ensure medical attention, if only from a samarit.
Anyone NOT doing that is NOT a decent person.

And Trump was concerned that these poor souls deserve to be shot at if they throw rocks at the military. My God! Our president is in moral decay. Complicit government leaders are there with him.#7yearoldgirl

Yet many people on social media unleashed a barrage of criticism not towards ‘inhuman’ immigration authorities and ‘cruel’ Donald Trump, but against the child’s parents. They accused her parents of dragging her miles away from home and putting her in a dangerous situation.

Very sad her parents dragged her miles and miles away from home putting her in a dangerous situation that can lead to dehydration now that is shameful!! Mexico offered asylum and people are refusing.

Why would a father take their child on a journey that he knew was dangerous & illegal? Sad!

Starvation and dehydration doesn’t come in 8 hours, people noted, adding that her father probably failed to provide the girl with food and water while on the journey.

This is a valid question. And I’m not even a supporter of trump, but the child’s father literally traveled from Guatemala to the border and didn’t tend to his daughter the whole trip it seems

So the father took his child on a journey to attempt to illegally enter the US & doesn’t make sure she eats & drinks. Who’s fault is this?

Read the article people… she went days without food or water in the care of family that brought her along the journey. That is the cause for the dehydration. If dehydration is that far along, it’s difficult to treat.

Gee, walking 2000 miles didn’t have anything to do with that, right?

Its amazing that you blame this on administration you hate but had nothing to do with it. Its funny that the dad didn’t feed or give her water for days. The border patrol didn’t know this until it was too late.

Some even demanded her father to be charged with child neglect.

Well I hope they charge the father for child neglect. This isn’t the Border Patrols fault.

Others concluded that both the girl’s parents and border officials were to blame for the tragic death.

The article says, “it is not clear whether the girl received provisions or medical care before her seizure.” She had a fever of almost 106. Both the parent and border officials are to blame.