Two police officers who shot and killed a black man outside a convenience store in Baton Rouge, Louisiana will not face criminal charges. Protests over the 2016 incident culminated in the deaths of three police officers.

Alton Sterling, 37, was fatally shot by Officer Blake Salamoni after a struggle outside a convenience store where Sterling had been selling homemade CDs. Officer Howie Lake II was present and helped restrain Sterling, but did not fire his weapon. 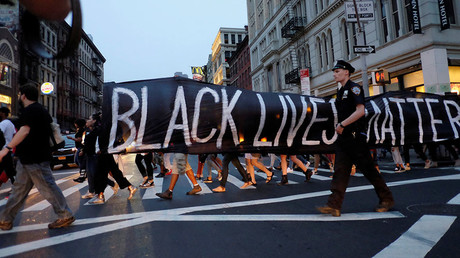 A report from Landry’s office outlines how the officers were called to the convenience store after a man was allegedly assaulted by Sterling, who was brandishing a pistol.

Sterling failed to comply with the officers’ instructions, prompting Salamoni to draw his weapon. Lake used a taser on Sterling, to little effect. As the officers tried to wrestle him to the ground, one of them spotted a gun. Believing that Sterling was reaching for the gun, Salamoni threatened him, then shot him three times into the chest, and three times into the back.

The officers then retrieved a loaded .38 caliber revolver from Sterling’s pocket. A convicted felon, Sterling was not permitted to own a firearm. Toxicology reports also showed the presence of several illegal drugs in Sterling’s system at the time of his death, which may have influenced his decision to resist arrest.

Landry made his announcement Tuesday, after meeting with Sterling’s family. Sterling’s aunt, Veda Washington-Abusaleh was distressed as she spoke to the press.

“He was murdered by two white racist police officers. He was murdered like an animal,” she said. “They’re not going to bring charges on anybody. Why would they do that? This is white America.”

Let me say this again: Officers rarely get charged with the killings of blk folks in this country – and even more rarely get convicted – bc what the officers are doing is LEGAL. That’s the true travesty! They have the discretion, but it isn’t exercised equitably. #AltonSterling

Officers Salamoni and Lake have been on paid administrative leave since the shooting.