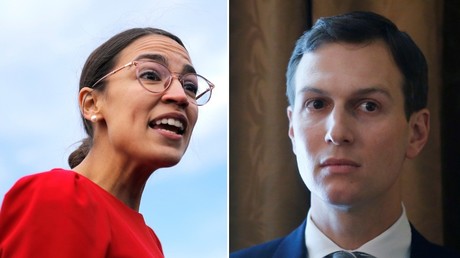 “Ah yes, of course, it’s classic Republican ‘bootstrap’ meritocracy: where the smartest, hardest-working, most fitting person for the job just so happens to be your son-in-law,” Ocasio-Cortez, who was elected in New York’s 14th congressional district on November 6, tweeted on Friday.

Ah yes, of course, it’s classic Republican “bootstrap” meritocracy: where the smartest, hardest-working, most fitting person for the job just so happens to be your son-in-law. https://t.co/u6mqhrJlGS

That comment was in response to a report about this prospect for Kushner, who is married to Trump’s daughter Ivanka and currently serves as one of the president’s senior advisers.

Trump said he has narrowed his list of people to replace Chief of Staff John Kelly –who will leave his post at the end of the year– to five people. He said the finalists are “mostly well known” and “terrific people.”

When asked during a White House briefing whether Kushner was indeed in the running, Press Secretary Sarah Sanders said she was not aware whether that was the case, but that he would be “great in any role that the president chooses to put him in.”

Meanwhile, Ocasio-Cortez wasn’t the only one who took to Twitter to slam the idea that Kushner might fill the vacancy.

Pretty soon Trump, Ivanka and jared are all going to be wearing different hats juggling multiple positions because no one wants to work there. Melania will be WH Press Sec when Sara Huckabee wakes up. Trump will think its his empire.

So the Trump Crime family take over will be complete.

This kind of news once generated only in corrupt third world poor countries .Now USA has this honor .

Trump’s appointment will be replacing Kelly, who Trump announced would be resigning at the end of the year. “John Kelly will be leaving – I don’t know if I can say ‘retiring,’” Trump told reporters on the South Lawn of the White House. “But he’s a great guy. John Kelly will be leaving at the end of the year.” That announcement came after reports that the two were no longer on speaking terms.