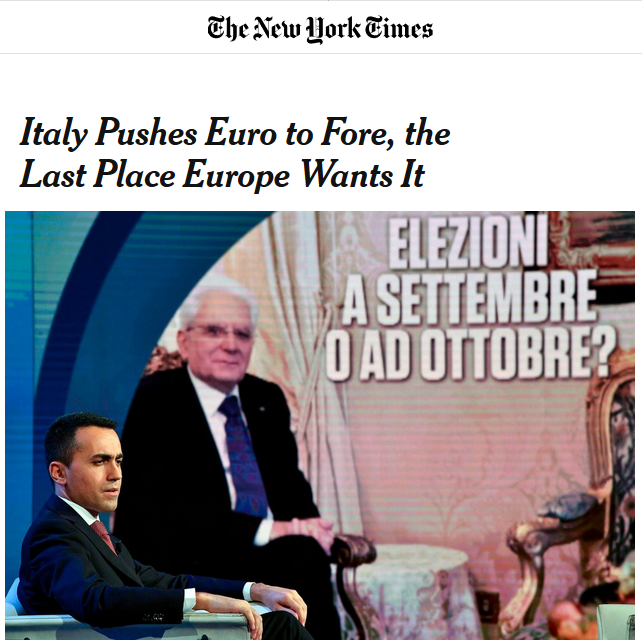 A New York Times article (5/29/18), discussing the possibility that Italy will leave the Eurozone, told readers that this decision would defy economic logic. It noted the various downsides for Italy of leaving the euro, and then told readers:

As demonstrated by the Brexit vote, which numerous analyses showed would not be good for Britain’s health, economic logic does not always prevail.

It’s not at all clear that “economic logic” would dictate that Italy is better off in the euro than outside it. Italy’s economy has stagnated as a result of having little control over its fiscal, monetary or exchange rate policy. It has consistently performed far worse than “experts” had projected. For example, in 2010 the IMF had projected that its per capita income would be 3.0 percent higher by 2015 (the last year of the projection) than it was in 2010.

Instead, its per capita income was more than 4.0 percent lower in 2015 than in 2010. This difference of 7 percentage points would be equivalent to $4,200 per person in the United States. Italy has still not recovered to its pre-crisis level of income.

The article also asserts that Italy would have trouble paying its euro-denominated debt if it were to leave the euro. While this is true, it is also likely that creditors would accept a partial write-down of the debt. If they are in a situation where they know that they can not recover the full value of their debt, it makes sense to accept a partial payment that the country would be able to make.

Of course, the creditors may decide to be vindicated, and demand full repayment as punishment to Italy for leaving the euro. As the article said, “Economic logic does not always prevail.”

Dean Baker is a senior economist at the Center for Economic and Policy Research in Washington, DC. A version of this post originally appeared on CEPR’s blog Beat the Press (5/30/18).