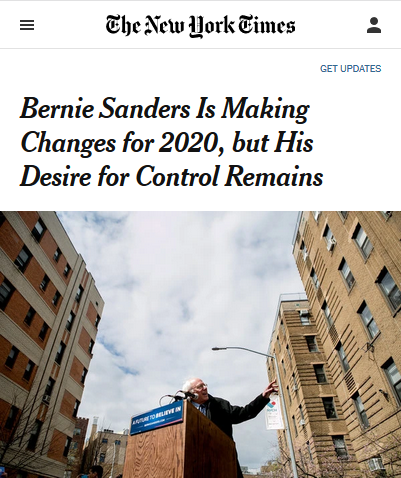 The New York Times (3/1/19) depicts Bernie Sanders making decisions for his own presidential campaign as a “desire for control.”

While the New York Times has been sandbagging Sen. Bernie Sanders (Ind.–Vermont) for years (Rolling Stone, 3/15/16), last weekend’s headline: “Bernie Sanders Is Making Changes for 2020, but His Desire for Control Remains” (3/1/19) is a particularly overt example.

Unless one reads past the headline, which most Americans don’t, one is left wondering about what exactly Sanders desires to “control.” Is it the country? The media? When one actually digs into the Times’ article, written by Sydney Ember and Jonathan Martin, one quickly discovers that what Sanders desires to control is his own campaign, and that his oppressed victims were his highly paid media consultants, who quit because Sanders was “not willing to empower them.”

Left unreported by the Times were statements by the consultants themselves (CNBC, 2/26/19)  claiming that they were leaving on a “very positive note” over “differences in a creative vision,” and that they would be happy to assist his campaign again in the future. In the Times version, instead, we’re given anonymous sources described as “Democrats directly familiar with the episode” who give the impression the consultants were “enraged” over their “humiliation.”

It is difficult to see what the problem is here. Are campaigns controlled by media consultants necessarily better than those controlled by the candidates themselves? Why should bending to “the wishes of his current advisers” be considered a good thing? The Times doesn’t explain, perhaps hoping readers will just take away the hint that Sanders’ “controlling” nature might itself be deemed disqualifying. 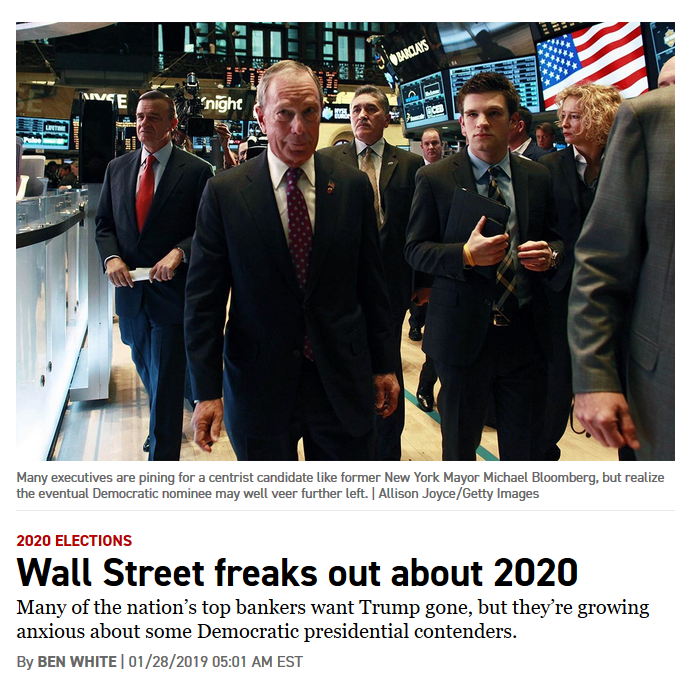 Funny–Wall Street does not seem to have any trouble distinguishing between Bernie Sanders and most of his 2020 competition (Politico, 1/28/19).

Another theme throughout the Times report is the implied notion that Sanders’ candidacy is redundant. When the corporate media aren’t busy undermining Sanders’ popular political agenda by claiming that it’s too “radical” and “expensive,” they also try to undermine his candidacy from the opposite angle, claiming that Sanders is now hard to distinguish from other candidates because numerous other Democratic candidates “support the same policies that made him unique in 2016.” The financial industry, though, doesn’t seem to have much difficulty distinguishing Sanders from most other Democratic candidates, as reported by Politico (1/28/19):

Bankers’ biggest fear: The nomination goes to an anti-Wall Street crusader like Sen. Elizabeth Warren (D-Mass.) or Sanders. “It can’t be Warren and it can’t be Sanders,” said the CEO of another giant bank. “It has to be someone centrist and someone who can win.”

Though some other Democratic contenders have endorsed some of Sanders’ proposals,  such as Medicare for All, it’s not always clear what such endorsements mean. A report in The Hill (2/7/19) noted that while Booker and Warren are co-sponsors of Sanders’ Medicare for All bill, they are “also touting less drastic alternatives.” Harris as well said “she also supports smaller steps,” though Medicare for All is her “preference.”

While several candidates, including Sanders, have declared that they would not take corporate PAC money, most of these candidates are still heavily reliant on wealthy contributors: 62 percent of Gillibrand’s funding over a five-year period came in donations 0f $200 or more, as did 65 percent of Harris’s and 72 percent of Booker’s. In contrast, only 17 percent of Sanders’ campaign chest (and 30 percent of Warren’s) came from such large donations (Intercept, 4/27/18).