The fact that the United States favors Israel in its decades-long “conflict” with the Palestinians is not a subjective or abstract question; it’s a well-established empirical fact. The US gives over $3 billion a year in military aid to Israel (more than the US spends on aid for the last seven countries it’s bombed combined), and defends it from sanction almost uniformly at the UN Security Council. Israel’s support from the US Congress borders on sycophantic. The US, on the other hand, gives no military aid to Palestine, and opposes resolutions that even acknowledge Palestine exists—much less support its resistance to Israeli occupation. The US gives some aid to the Israeli-approved and corrupt Palestinian Authority, but this largely serves to buy off the docile and unpopular PA. 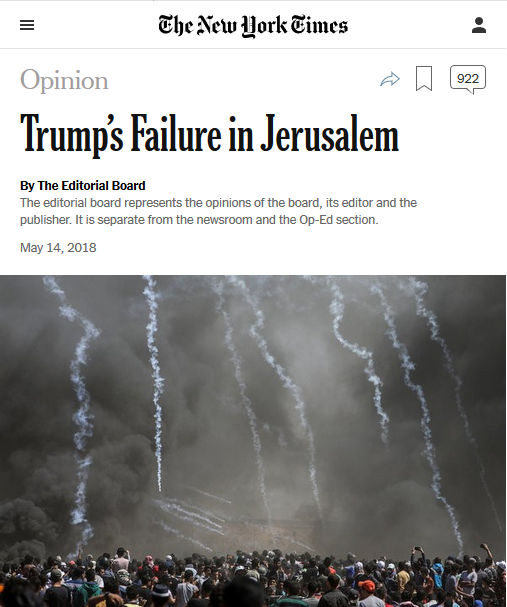 New York Times editorial (5/14/18): “For generations the Americans, the honest brokers in seeking peace, withheld recognition of either side’s claims.”

None of these simple, clear-as-day facts however, seem to be known—or at least acknowledged—by those who make up the New York Times editorial board. In an otherwise decent scolding of President Donald Trump for moving the US embassy, the Times (5/14/18) fired off this cartoonishly naive and ahistorical gem:

Mr. Trump’s announcement that he was recognizing Jerusalem as Israel’s capital, and moving the embassy from Tel Aviv, swept aside 70 years of American neutrality.

It’s difficult to imagine any of the seemingly knowledgeable and healthy adults at the Times editorial board actually thinking the US has been “neutral” in its dealings with Israel and Palestine. Perhaps not 100 percent lockstep. Perhaps sometimes pushing back against the most right-wing elements in Israel. But “neutral”? It flies in the face of decades of evidence to the contrary.

This isn’t the first time the New York Times has played the part of a kindergartener finding out Santa Claus isn’t real. As FAIR noted last December (12/30/17), Times reporter Mark Landler used the specter of Trump to totally whitewash America’s aggressive and violent past, in a manner that crosses from jingoistic to outright goofy:

How they know this wasn’t made clear. Perhaps Landler and his editors at the Times did a secret poll and found out the United States has been viewed by “the world” as a “reliable anchor of the liberal, rules-based international order,” rather than a superpower bully that defends rogue apartheid states and launches wars of aggression without UN sanction. But in the article, this “view” was simply asserted, all the ideological lifting being done by the reporter’s back-of-the-napkin editorializing.

In a similar bout of amnesia (FAIR.org, 2/9/17), the Times editorial board argued earlier that year that America’s wars over the past decades were started for purely noble intentions:

At least in recent decades, American presidents who took military action have been driven by the desire to promote freedom and democracy, sometimes with extraordinary results, as when Germany and Japan evolved after World War II from vanquished enemies into trusted, prosperous allies.

Again, one is compelled to ask, how do Times editors know what’s in the hearts of our beloved leaders? What’s the evidence that their motives were benevolent, their empire an earnest, aw shucks effort to help out the little guy?

It’s understandable wanting to impress upon readers how dangerous and flagrant President Trump’s actions are and have been. But in doing so, there’s no reason to rewrite history and whitewash America’s crimes, or its prior bad-faith actions with regard to Palestine—if not for the sake of history, at least for the sake of their paper’s credibility.