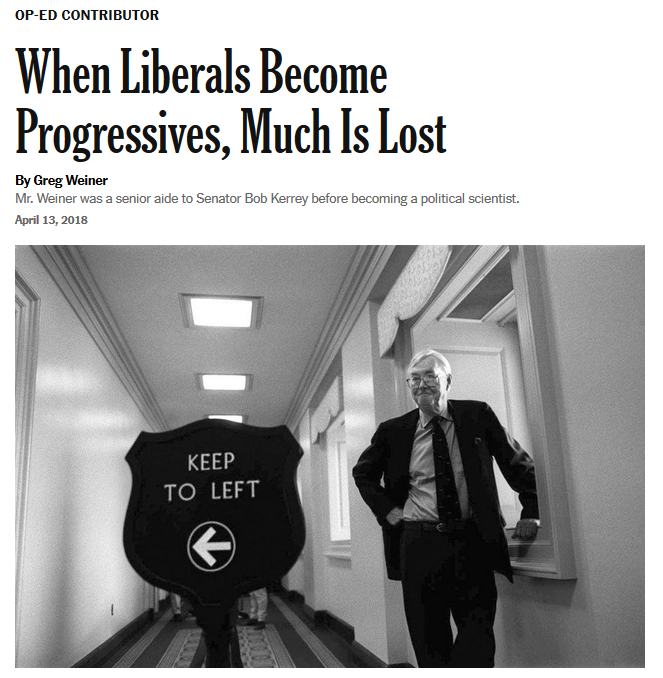 Its ostensible subject is why Democrats should call themselves “liberals” and not “progressives.” But in making that case, it hits most of the main points of the New York Times‘ ideology—one that has guided the paper since the late 19th century.

First and foremost, it’s a defense of the status quo. “The basic premise of liberal politics,” Weiner writes, “is the capacity of government to do good, especially in ameliorating economic ills.” But not too much good, mind you:  “A liberal can believe that government can do more good or less,” he stresses. Weiner draws a contrast with progressives: “Where liberalism seeks to ameliorate economic ills, progressivism’s goal is to eradicate them.”

So Lyndon Johnson’s Great Society is cited negatively as an example of “a progressive effort to remake society by eradicating poverty’s causes”—in the process supporting  “community action” and  financing the “political activism”—presented without explanation as a self-evident evil.  The explanation, presumably, is that the poor should remain passive as they remain poor, gratefully accepting the handouts that “alleviate” their plight, as “cutting checks,” as Weiner puts it, is “something government does competently.”

Coupled with this anxiety about “eradicating poverty’s causes” is the confident assurance that the truth is always somewhere in the middle. “Unlike liberalism, progressivism is intrinsically opposed to conservation,” Weiner warns:

Nothing structurally impedes compromise between conservatives, who hold that the accumulated wisdom of tradition is a better guide than the hypercharged rationality of the present, and liberals, because both philosophies exist on a spectrum.

Conservatives make better partners for liberals than progressives, because “one can debate how much to conserve.” But you can’t debate how much to progress, apparently: “Progressivism is inherently hostile to moderation because progress is an unmitigated good.”

In other words: Equality and justice, sure, but let’s not rush into things, is the “liberal’s” advice. He endorses “policies [that] develop gradually and command wide consensus—at least under normal circumstances.” (Progressives have an unnerving desire to “depress the accelerator.”)

Something that doesn’t change is the right wing of the left’s attraction to redbaiting. Weiner praises “the Cold War liberal who stood for social amelioration and against Soviet Communism,” a figure who “was often maligned by progressives.” Without coming out and accusing progressives of Stalinism, he describes progressives’ response to critics as “a passive-aggressive form of re-education,” one that “supersedes the rights of its opponents.” The example he gives of this is the “progressive indifference to the rights of those who oppose progressive policies in areas like sexual liberation”—an odd arena to cite, since the main “rights” that opponents of “sexual liberation” have demanded in recent years are the “right” of small businesses to discriminate against gay customers and the “right” to check the chromosome status of people who use public restrooms.